If you are looking for the modern RuneScape guide for this content, please see our Imp Catcher guide.

The Wizard Grayzag has summoned hundreds of little imps. They have stolen a lot of things belonging to the Wizard Mizgog, including his magic beads.

Speak to Wizard Mizgog located in the Wizards' Tower.

Getting to the Tower 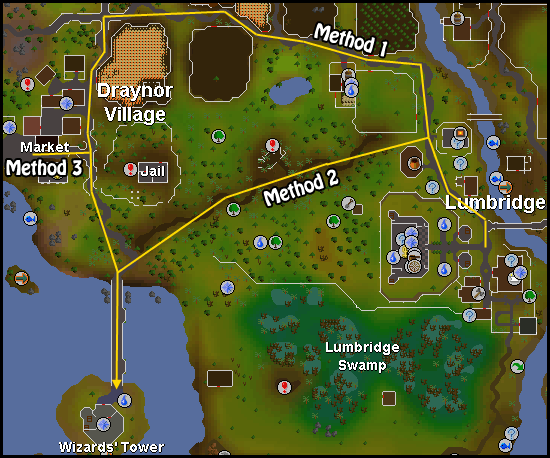 Home Teleport and Walking: There are two methods to doing this. The first is simplest and would be best used by players who have just begun playing RuneScape as it doesn't take you into places where you could possibly get lost. To use the first method use the Home Teleport spell. From there walk north and continue following the path until you come to a crossroads. Either read the signpost or head south to arrive in Draynor Village. Keep following the road South and you will come to a big stone bridge. Head across that and you are in the Wizards' Tower.

The second method would be suggested to players who have explored the F2P area a bit more then people who have just started playing RuneScape. Head north once again until you come to the General Store. Walk behind it and you will see a dark brown path. Follow this through a dark looking forest filled with Goblins and the occasional Spider. Once you get to the end of the brown path you should be near the bridge to Wizards' Tower. Just walk across like in the other method and you are there.

For Members there is also these added options of getting to the Wizards' Tower. One of them is to use an Amulet Of Glory to teleport to Draynor Village and then head South to the Wizards Tower.

Another method is to use the Fairy Rings. With a Dramen Staff equipped use any teleport to Zanaris spell and then with the Fairy Ring behind the tower use the code "DIS". 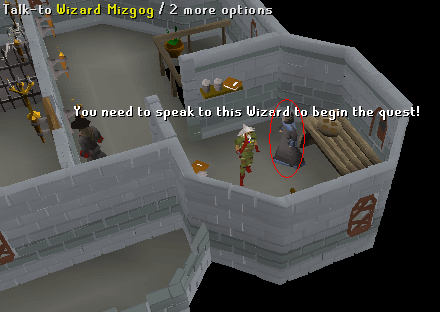 Start talking with Wizard Mizgog and ask him for a quest PLEASE and you will find out that he needs help with something. It would appear that a rival of his; Wizard Grayzag has enlisted the help of hundreds of Imps. He tells you that the Imps have stolen his four magical beads and that they are located all over the kingdom.

He would like your help in getting them back.

There are two ways of getting the beads you need to finish Imp Catcher. By far the easiest way is to buy them off of another player.

But if you are up for a challenge and think you have a bit of patience, try and kill the Imps to get them back. The Imps are spread all over RuneScape and you can find them nearly anywhere there is a major city or town. The most common places to find them is south of Falador, just below the wall. Around all the entrances and exits of Varrock. They are difficult to kill because the quite often teleport around and out of battle before you get a chance to deliver the final blow. If you are a higher level, this will be no problem as you can just one-hit-kill them. Another problem is that their drops aren't always 100% beads. They will drop Bread, Ashes and Flour Pots just to name a few. Just stick at it and you will get the beads in no time at all.

Once you have the beads head back to the Wizards' Tower and talk to Wizard Mizgog again to give them back to him. He will mention that he needs to find out if they're his beads and then he will place them into a device on his table. This triggers a cut-scene and ultimately the end of the quest.

An Amulet Of Accuracy 875 Magic Experience

As shown above one of your rewards for completing this quest is an Amulet of Accuracy. As the name suggests it is used to boost your accuracy for Ranged skills like Magic, but it can also increase your accuracy for hand-to-hand combat.. Below are the stats for it. 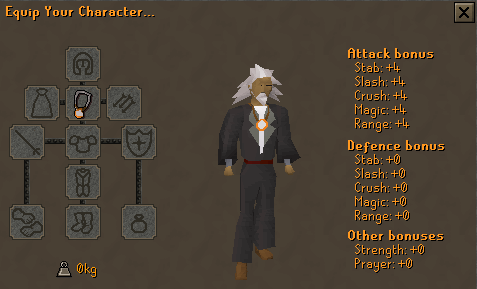