Constitution, formerly known as "Hitpoints", is the cradle of all Combat skills. Without Constitution, fighting an enemy or even having a quick spar with your friends at the Duel Arena would be impossible. This skill is responsible for the amount of Life Points you have. The higher your Life Points, the longer you can last in a fight against any kind of trouble you may face. By reading this guide, you will further understand the concept of Constitution, and learn how to sustain yourself and your health in the realm of Gielinor.

Unlike the majority of skills in RuneScape, Constitution is not leveled by performing tasks which pertain to the skill you are raising, rather, it is simultaneously trained by using any form of Combat. These skills include Attack, Defence, Magic, Ranged and Strength. It must be noted that Constitution is a skill that takes a little longer than other skills to level. To check the current level of your Constitution, click on your skills interface and hover over the box that has an image of a heart as shown below. Your skill level will be shown to the left of the heart.

Leveling your Constitution may be tedious at times. However, if trained to a considerable level, maintaining your health should be easy. Also, if you're looking to increase your combat, Constitution serves as 0.25 of a combat level. A successful attack on an opponent will result in an increase of Constitution experience. The experience is nearly equivalent to the amount of damage dealt from your attack. The ratio is 1.3 experience points for every 10 points of damage you accurately strike.

Even though combat is the traditional way to rack up experience, there are other, more diverse ways to accumulate it. By completing several quests, minigames, miniquests, distractions & diversions, and random events, you may be awarded a nice chunk of experience. View the charts below to see which activities earn you the experience you desire.

Death and How to Prevent It

Picture yourself taking a stroll through the Wilderness when all of a sudden you find yourself amongst the nasty green dragons. Unfortunately, you've misplaced your anti-fire shield and forgot to compensate yourself with a new one, but decide to bear out the fight with the vicious dragon heading towards you. You take some Life Points away from it, but it decides to retaliate with it's fire breath. Consequently, you burn to death and find yourself at your respective respawn point several seconds later. Death is a natural part of roaming throughout Runescape. However, once you fall, you learn to strengthen up, and the amount of deaths that occur as you experience the game will grow less and less.

Death is the state in which your player's Life Points reach zero. Under "normal" circumstances, a gravestone will appear where you died, and your character will respawn. When a player dies, the respawn interface screen will appear, allowing the player to choose the items they wish to keep. Players may normally keep up to three items, and by default, these items will be the items with the highest Grand Exchange value. However, when a player is 'Skulled' -- which occurs when entering the Abyss, or after attacking another player in the Wilderness -- no items will be kept. The Protect Items Prayer (requires level 25 Prayer), when activated, allows players to keep an extra item on death, for a total of four items when not Skulled, and one item when Skulled. 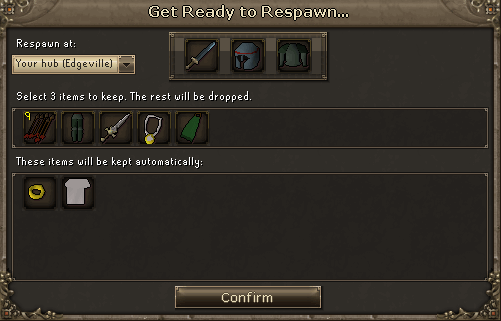 As you can see in the above picture, this player will keep a Rune Longsword, a Rune Med Helmet, and an Adamant Platebody. If you would prefer to keep a different item from the list, you may drag it over one of the currently 'kept' items to replace it.

You may also select a location to respawn to. When you first begin playing RuneScape, you'll only have the choice to respawn in Lumbridge. However, there are many other respawn points throughout RuneScape. Some cities, known as "hubs," can be selected as your respawn point if they were the last hub you visited. The following hubs currently exist in RuneScape:

Some respawn points may also be unlocked by completing quests:

Once you confirm your kept items and your respawn point, a gravestone will appear over your dropped items (the items that were not kept on death), and you will appear at your selected respawn location. You'll also notice a countdown timer below your minimap. Your dropped items will be protected until this timer runs out, after which time they will become visible to other players for one minute before disappearing forever. Other players can bless your gravestone and give you additional time to make it back and claim your items.

You can find out some useful information about the items you will keep on death by clicking on the 'Show Items Kept on Death' button in your equipment interface. You'll see the default items kept on death, as well as any items that will be lost or destroyed upon death (such as Runecrafting Pouches). Some items, such as runes, quest items, untradeable items, and low value items will always be kept. Other stats, such as your carried and risked wealth, as well as your gravestone type and duration, also appear on the right side of the screen. 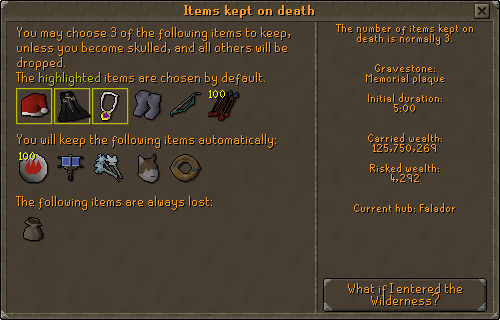 The exception to this is when a player dies in the Wilderness. In this case, the player will have no choice in which items are kept, and a gravestone will not appear. The player will respawn near the Edgeville bank with their three most valuable items (unless Skulled).

Of course, there are "safe" areas in the game where players will not lose any items upon death. Any minigames that are safe, such as Castle Wars, Pest Control, Clan Wars or Soul Wars, will allow players to keep all of their items on death. Other safe areas in the game, such as inside a Player Owned House, also allow players to keep all of the items they are carrying should they happen to die.

Now that you understand the concept of dying in the game, you can learn how to deter or prevent yourself from being killed. Spells, jewelry, prayers, and potions are all methods to decimate the chances of dying.

1 These spells may only be performed if Members have finished the Lunar Diplomacy quest.

1 It is still possible to die while wearing this, if you reach 0 Life Points before dropping below 10% of your maximum Life Points.

Hit splats are the measurement of damage your character receives or produces. When you attack someone in regular forms of combat, three types of hit splats may occur. Damage in combat is shown through your Life Points bar. It is a green bar that hovers over you and your opponent to show how much more damage each of you can take. The red shows sustained damage, the green shows the remaining life points.

Usually accompanying a hit splat will be a small icon to the left. This resembles the type of hit in which the attack dealt damage with.

While in the midst of combat, or even whilst you are poisoned, there are several ways in which you can heal yourself to prolong or prevent death. The common method of healing in the realm of Gielinor is by eating food. View the list below to see the types of food you can eat, and how much they heal you. Some even boost other stats for you as well!

These are just a few of the many foods that RuneScape is filled with. By becoming more acquainted to the game, you will discover even more foods that will stabilize your Life Points at a decent amount . Unfortunately, for every good thing, there must be an opposite. There are "bad" foods in RuneScape in which you should avoid. See the list below to see which foods you should avoid and why.

For anyone who completes the long and challenging road to level 99 Constitution, there is a reward; and bragging rights. Once you have achieved 99 Constitution, head on over to the Duel Arena.