Magic is a unique skill in RuneScape, allowing you to cast spells using magical Runes imbued with special powers. You can do so many things with this skill, from teleporting to cities instantly, changing a stack of bones into tasty bananas, or even sending a fiery missile towards your opponent!

Rune Stones, or Runes for short, are imbued with magical powers from the land, and they were created many ages ago by the ancestors of RuneScape. When you hold enough of a specific combination of Runes, you can cast a magical spell. Runes can be found throughout RuneScape, lying on the ground, looted from enemies, and crafted using your RuneCrafting skill. They can also be bought from Magic Stores such as the ones in Varrock, Port Sarim and the Magic Guild.

There are three spellbooks in RuneScape, each containing a unique set of spells available to the caster. To use the spells in a given spellbook, you must first activate the spellbook. Only one spellbook can be active at a time.

This is where you'll be casting all of your magical spells from; the Spell Book. By clicking on the book icon to the right of your screen, it will bring up a list of all your magic. Depending on how many spells you've learned and the number of runes you're holding, you may see 2 different colored symbols:

Colored-in Icon: You have a high enough magic level and the required Runes to cast the spell.

Blacked-out Icon: You can't use the spell until you reach a high enough level, or you don't have the required Runes.

When you hover over a spell's icon, you will see some important info about it, such as the required Runes to cast it, a description of the spell, and the needed magic level to cast it. In the picture, it shows how many runes I'm holding at the time, and how many I need to cast the spell. The first number is how many Runes I have, and the second is how many are needed to use the spell. I have 5 Nature, 5 Water, and 5 Earth Runes. 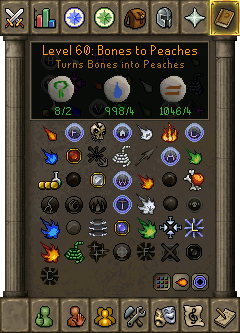 After completion of Desert Treasure, the Ancient Magick Spellbook will be unlocked. Level 50 Magic is required to use this spellbook, and while this spellbook primarily contains attack spells, it also offers several teleportation spells. There are four main groups of attack spells which has an additional effect on top of inflicting damage:

Some combat spells also have the ability to hit multiple enemies.

For more information about this spellbook, please see our Ancient Magicks guide.

The Lunar Spellbook is initially unlocked after completing the Lunar Diplomacy quest, and completion of the Dream Mentor quest grants access to an additional seven spells. Players may also unlock up to eight more spells as rewards from the Livid Farm Activity. Level 65 Magic is required to use the Lunar Magic Spellbook, and all spells require Astral Runes to cast.

Many of the Lunar Spellbook's spells are focused on assisting players by healing Life Points, curing poison, sharing potions or teleporting yourself or others. The Spellbook Swap spell is notable here, as it allows you to cast a spell from either the Standard Spellbook or the Ancient Magick Spellbook

For more information about this spellbook, please see our Lunar Magic guide.

There are a variety of magical items that can help to make your magic stronger, and your spells more likely to succeed, including robes, staffs, and amulets.

Amulets are worn around your neck and will offer additional magic bonuses. Most of them can be crafted with gold and cut gems, and then must be enchanted in order to make them powerful. The exceptions are with the Lunar Ring, Lunar Amulet (both obtained during Lunar Diplomacy), and the Third Age Amulet (Treasure Trails reward)

Some articles of clothing such as robes, and hats will increase your magic. These are the best types of armor for Mages, since they allow your magical energy to "flow" freely. Some can be looted from Wizards, and others can be bought in a magic shop. Still, other kinds of magic armor can be made, or obtained by other various methods.

Staffs can be a Wizard's best friend during battles (and for walking long distances!). There are 3 main kinds of Staffs: Elemental Staffs, Battle Staffs, and Mystic Staffs. There are also special Staffs that you can obtain from monsters or other quests.

Before explaining those kinds of staffs, there is some info that you should know. First, there are 2 basic staffs: Staffs and Magic Staffs. Staffs are just like a regular carved stick, and they add no bonuses to your stats. Magic Staffs add a slight amount of Magic Attack & Defence, but they have no special abilities.

All Staffs will allow you to continually use an attack spell on your enemy until it dies, or you run out of Runes. To use this option, go into your Fighting Style menu while you are wielding your staff. Near the top on the right side you'll see a spell button; click it to select your choice of several elemental attack spells, ranging from low to high. You'll now attack with that spell, rather than with a melee attack. 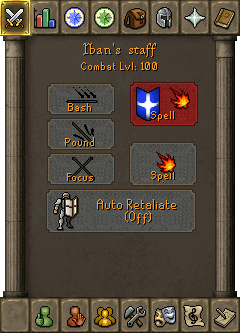 These include Air, Water, Earth and Fire. They can be bought at Zaff's Staff Shop in the northwest part of Varrock for 1,500gp each, and they will be equal to an infinite number of that type of Rune when the staff is wielded. So, if you use a lot of one type of Rune, it would be wise to buy that kind of staff. Each of these add 10 to both your Magic Attack and Defence bonuses.

These staffs are much like regular Elemental Staffs, but they have a Charged Orb attached to them. Battle Staffs are much stronger than regular staffs, and they will still allow you to use an unlimited number of Runes of that type. The Orb can be Crafted with glass, and then you need to cast the appropriate Charge spell on its Obelisk to power it up. Then just attach the Orb to the Staff to get a Battle Staff.

These types of staffs are actually just enchanted Battle Staffs. They are much stronger than normal staffs (comparable to a Rune Longsword), and still take the place of a Rune. To get a Battle Staff enchanted into a Mystic Staff, you first need to complete the Scorpion Catcher Quest. Thormac the Wizard, located south of the Seers Village, will enchant your staff for 40,000gp.

These staffs can be obtained from a quest or a monster.

Wands are another type of Mage weapon, which you can buy from the Mage Training Arena using Pizazz Points. These are particularly useful, as they give decent Magic Attack and Defence bonuses, and you can autocast regular spells with them.

One particular note about wands, is that you must own them in order before being able to move onto the next one. for instance, you can't use a higher-up wand before using a Beginner Wand.

There are numerous drinks, potions, and other items which give a temporary boost to your Magic level.

Before you begin to use some Magic, you should gather all the Runes you need to cast the spell you want to use, by either buying them, making them with your RuneCrafting skill, or fighting enemies. You should also bring any magic items discussed above, if you want those bonuses. Now once you've found a target, choose your attack spell and click on your opponent to cast the spell.

Other Types of Spells

Of course, there are other different kinds of magic spells to use, but you need to reach a high enough level to cast them. Depending on the kind of spell, you need to use it on a specific target. For instance, you can only cast Teleport spells on yourself, and an Enchant spell is only used on rings and amulets. For more info about different kinds of magic, please see the Spell List section.

There are a number of different types, or categories of Magic spells, each with their own special effects.

This type of spell is what you'll probably be using in combat (if you're a Mage). It's best to wear gear such as Robes or any of the equipment outlined above, which is specifically designed for a Mage. Wearing armor such as Platebodies and Helmets not only make you more suceptible to magical attacks, but will decrease your ability to use your own attack spells.

These spells allow you to turn an ordinary item, such as armor or bones into gold or other items.

Bones to Bananas will cause any bones in your inventory to become edible Bananas. This is useful for when you're low on health and need some food in a hurry, although it isn't a very commonly used spell.

Bones to Peaches is similar to the "Bones to Bananas" spell. It will turn any bones in your inventory into Peaches, which heal 80 Life Points. Although, you can only use this spell once you've bought the Bones to Peaches spellbook from the Mage Training Arena.

Low Level Alchemy will turn an item into the amount of gold it sells for in a General Store, while High Level Alchemy will yield the amount of gp it sells for in a specialty shop. If you're trying to High Alchemize large amounts of a certain item, it's best to put the item into Bank Notes and cast the spell on the notes. It only alchemizes 1 item at a time, but it's much faster than having to run back to the bank!

Superheat Item will act as a Furnace and smelt a bar of ore for you. Just cast the spell on the ore of the bar you wish to make (if you want to make a Mithril Bar, cast it on a Mithril Ore).

This kind of spell can be cast on Rings, Amulets, and certain Necklaces with gems inside. First just craft the item, and then cast the correct Enchant spell on it:

After you enchant your Amulet, Ring, Necklace or Bracelet, it will be powered up, bringing out magical abilities.

Most jewelry containing gems have the ability to be enchanted to have special effects when worn.

Teleother Spells are only available on Members servers and will allow a player to teleport you to another location. Of course, you need to give permission for them to use the spell on you, and you must have the Accept Aid option (in your controls menu) set to "Yes" for it to work. A menu will pop up asking if you want the other player to teleport you and you'll be able to choose "yes" or "no."

There is also the Telekinetic Grab spell. Although it doesn't teleport a player, it instead allows you to "grab" an item that you can see but can't reach.