For some RuneScapers, the tap, tap sound of a pickaxe against a rock is all that's needed to get the day started. This handy skill allows you to get ores from a rock, which can be used in smithing or trading, and it can be quite profitable once you can mine some of the various kinds of metals.

To begin mining, you should first obtain a basic pickaxe which you can obtain for free from Bob at Bob's Axes in Lumbridge. Once you have one, it's time to set out and find a place to mine. There are several mining spots around Runescape, but the cities of Lumbridge and Varrock are usually where you should start off your first Mining adventures.

Now that you've found a place to mine, you can either jump right in and click on a rock to mine from, or you can prospect the rock. When you prospect a rock you will search for any ores inside and determine what type of ore is in the rock. This could take some time, so it's best to learn what color each different rock will be when it has ore in it. Now you can click on a rock to mine from it, and your character will keep mining until you obtain the ore. 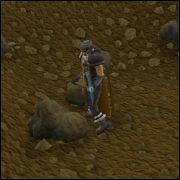 From time to time you may find an uncut gem while mining. These can be crafted, and are valuable to anyone working on the skill. Gems can be cut with a chisel to make them more valuable when sold to a store, but most people would prefer uncut gems to work on their crafting. There's a greater chance of mining a gem if you are wearing a charged Amulet of Glory, but finding a gem can still be difficult.

See the below "Gems" sub-section for more information.

If you need a quick "level-up," a Dwarven Stout is just the drink for you. Stouts will raise both your mining and smithing levels by 1 for a short amount of time. They can be bought from the Rising Sun Bar in Falador for 3gp, so stock up on them if you plan on using many stouts during your mining career.

As a reward from the Forgettable Tale (of a Drunken Dwarf) Quest you will get 2 Mature Dwarven Stouts which will increase your Mining and Smithing levels by 2, not just the ordinary 1 level. When Brewing Beer there is a chance that it will become Mature and give extra bonuses. To make it more likely that it becomes Mature you can add "The Stuff" which is something you can buy as a reward from Trouble Brewing.

As well as giving more Life Points and Strength, the drink also gives you +1 Mining temporarily. The Rum can be brought from Harpoon Joe's House of Rum in Mos Le'Harmless for 30gp.

This is also known as "Drop Mining." Powermining is when you rapidly mine ores and drop them solely for the purpose of gaining quick experience. Generally, players will powermine ores that are easy to mine, such as Iron, Copper, Sandstone and Granite. These ores respawn quickly and are easy to obtain.

Miners that are more skilled have the ability to use higher quality pickaxes which allow you to obtain ores more quickly when mining. Pickaxes range from Bronze being the lowest quality, and Rune being the highest, but they are rather expensive.

Pickaxes can be bought from Nurmof's Pickaxe Shop, which is found in the Dwarven Mines. There are two entrances to the mine: the first being in a building northeast of the east Falador bank, and the second being to the south of Ice Mountain (located north of Falador). The shop itself is found to the west of the entrance. You must go around the twisting passage, and the shop is north of the General Store.

Alternatively, you can smith your own pickaxes after the completion of the Peril's of Ice Mountain quest, provided you meet the smithing requirement to make the desired pickaxe.

The Dragon Pickaxe is a rare drop from the Chaos Dwogres (level 117), Chaos Dwarf Hand Cannoneers (level 100), and the Chaos Dwarfs (level 48) at the Chaos Dwarf Battlefield. To reach the monsters, you must have completed the Forgiveness of a Chaos Dwarf Quest. This pickaxe requires a Mining level of 61 to use and is the fastest pickaxe in the game, even beating the Inferno Adze in terms of speed. This pickaxe has a special attack called "Shock", which drains 100% of the Special Attack Energy Bar and increases your maximum hit while draining your victim's Attack, Ranged, and Magic levels by 5%. This special attack takes slightly longer to perform than a normal attack.

The Inferno Adze is a tool capable of being a mining tool and a woodcutting tool. It is obtained from the All Fired Up Activity. It requires level 41 Mining to use as a mining tool and level 92 Firemaking to wield. It has the same mining speed as a Rune Pickaxe, as its main purpose it to be used as a Woodcutting tool, with the benefit of serving as a pickaxe.

The Sacred-clay/Volatile-clay pickaxe is a reward obtained through the Stealing Creation Activity. Both pickaxes require level 40 Mining to use and each give bonus experience per ore mined (with the exception of a few ores in Runescape). The sacred-clay variant of the pickaxe gives double the normal given experience, while the volatile-clay version gives 2.2 times the normal experience. Be aware that neither of these pickaxes are permanent and will disappear or morph into a different tool after a certain number of uses. These pickaxes are relative to that of a Rune Pickaxe in terms of mining speed.

Of course, we can't forget the main part of mining; the ores! Each ore can be found in a specifically colored rock to match the ore, and when a rock is full of the ore it will change color. Instead of prospecting each rock, it's best to remember what each rock looks like, in order to make mining go much quicker.

While mining rocks, you may happen to mine a Gem. Gems can be used to make various objects such as jewelry or bolt tips, and come in a variety of types. Regular gems, including Sapphires, Emeralds, Rubies and Diamonds can all be mined from regular rocks containing ore; the most common ones being Sapphires. If you're a Member and wearing a charged Amulet of Glory, you'll have a better chance of mining gems.

There are also other kinds of gems, including Opals, Jades and Red Topazes which can only be mined from the Shilo Village rocks. Once you complete the Shilo Village Quest, you will be able to use these rocks to mine all types of gems.

Some of the ores that you'll mine in RuneScape only have a certain purpose, such as being used in a quest. Others have unique uses instead of being able to be smithed into armor and weapons.

Each ore in the game takes a certain amount of time to respawn, or reappear so that you can mine it. Generally, the higher-level ores take a longer time to respawn than lower level ones, and the number of players on a server also effect ore respawn times: the more people on a server, the quicker an ore will respawn. The following is a chart of approximate respawn times for ores: