Ranging is another distinctive combat skill, allowing you to attack your enemies from a distance, rather than close-up. This gives you the advantage, since most of your enemies are unable to attack you from far away, and you have the opportunity to inflict massive amounts of damage before they even reach you!

Rangers can be quite powerful as they become stronger and more experienced at the art of Ranging, but you need to know several things before starting out.

The weapon of choice for many Rangers is the Bow, which uses arrows to hit your enemy. There are 2 kinds of bows: Shortbows and Longbows. Shortbows are known to fire arrows more quickly than Longbows, but they're mainly used for close combat. You can also use a Crossbow and bolts, but generally they are less effective as you become a more experienced Ranger, since they only add 6 to Ranged Attack.

The basic Ranging equipment can be bought from Lowe's Archery Store in Varrock, located just northeast of the General Store, and also from a new Arrow Merchant in Rimmington which is a great place to buy supplies due to the fact that most people disregard it, and the stocks are always high.

There's also a Member's shop in Catherby that sells more advanced equipment, the Grand Tree Shop that sells bows and arrows, and of course the Ranging Guild. The Fletching skill can be used to make bows and arrows.

Now that you have your Ranging equipment, equip the bow and arrows (or crossbow and bolts) by clicking on them in your Backpack. To attack an enemy, just click on the "Attack" option to begin firing arrows or bolts. The most effective way to attack an enemy would be to stand behind an obstacle such as a gate or table, since they will be unable to attack you. Although, some of your foes may have the ability to attack you with their own Ranging weapons. 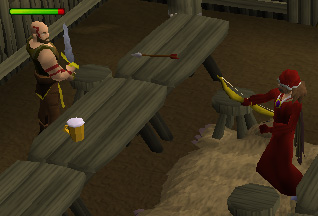 When you equip a Bow, you have the choice of using 1 of several Fighting Styles; each of which give different amounts of experience, although each style gives about 1.3xp to Constitution: 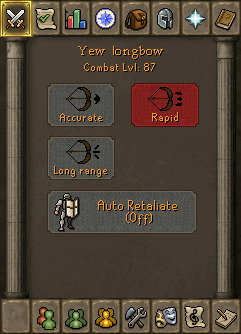 If you need a small boost to your Ranged level, have a drink of a Ranged Potion. it will increase your Ranged level by 15% for a short amount of time, and it can be made with your Herblore level if you're a Member.

Bows are the most widely used Ranging weapons, using arrows as their ammo. There are various Bows that you can use, although Free-Players can use up to Maple Bows. The Ogre bow is obtained from the Big Chompy Bird Hunting Quest. Crystal Bows are only available after completing the Roving Elves Quest. Check below for more info about it.

After completing the Roving Elves Quest, members have the opportunity to buy a Crystal Bow for 900,000gp. You must have at least level 70 Ranging to use the bow. Unlike other bows, the Crystal Bow uses no ammo, and instead fires a magical shot. When you first start using it, it will have 2,500 uses, and each time you fire it, the remaining shots will decrease (As well as the attack bonus). If you right-click on the bow, you'll see a rating out of 10, depending on how many shots you have left.

When all 2,500 shots have been used up, the bow stops working and turns into a crystal seed. This seed can be regrown into a fully charged bow by Ilfeen the Roving Elf, who can be found in central Isfadar. The first time you have a crystal bow recharged it will cost 900,000gp, but the price reduces after that:

It's also worthwhile noting that you can have more than one Crystal Bow at once, by purchasing more Crystal Seeds and charging them.

Arrows can be made from different metals, stronger metals being able to inflict more damage and be more difficultly damaged. Free-Players can use up to Adamantite Arrows. Members can also poison arrows by using a Weapon Poison Potion with them to poison up to 5. Better arrows will require you to use a certain bow or higher in order to Range with them.

There are quite a few different types of Crossbows in RuneScape, which are another type of Ranging weapon that fire Bolts rather than Arrows, and are slower than Bows. It's for this reason that they are not as commonly used by Rangers.

There are nearly as many types of Bolts as there are Crossbows. These are the main ammo for Crossbows, and can be made with your Fletching and Smithing skills. Regular bolts may be poisoned with Weapon Poison. Most of them can also be "modified" with special tips to pack more of a punch. these tips include:

Here is a chart of the different kinds of bolts you can make, as well as the Bolt Tips you can add to them:

Bolts with special tips (Gems, Pearl, or Opal) may be enchanted with your Magic skill to have all sorts of interesting (and helpful) effects on your enemies. Simply place any bolts you wish to have enchanted in your backpack, and then click on the level 4 "Enchant Bolt" spell in your spellbook, to see a menu of possible enchantments. then just select one to enchant your bolts.

You've probably seen the "secret spy" movies in which a thief makes a cunning entrance with a grappling hook. Well, now you can use your own Mithril Grapple to scale walls and pass over certain Agility obstacles.

To accomplish this, simply Smith a Mithril Grapple and some mithril Bolts and attach them. Use a coil of Rope with the Grappling Hook, and with a Crossbow equipped, use the Grapple with the shortcut to scale it. Be sure to have a spare though, as these devices can sometimes break!

Pouches can be bought from the Crossbow Salesman in Keldagrim, and are designed to hold multiple type of bolts at the same time, meaning that you'll have more room for other items in your backpack.

The pouch has four slots, and each slot is able to carry up to 255 bolts of any type, for a total of 1,020. If you right-click on a slot with bolts in it, you'll be able to either equip them or remove them from the pouch. When the pouch is dropped, all of the bolts currently inside will appear on the ground, and the pouch itself will disappear.

Throwing darts are very fast one-handed weapons which can be poisoned with a Weapon Poison Potion. You can make throwing darts once you complete the Tourist Trap Quest by Smithing a Dart Tip, and then adding Feathers to them.

Like throwing darts, throwing knives are one-handed ranging objects which have a very fast attack speed. They can also be poisoned with Weapon Poison.

Throwing Axes can be bought from the Tribal Weapons shop in the Ranging Guild, and are also dropped by numerous monsters. These weapons are wielded with one hand, although they are slower than throwing darts and knives.

Much like throwing knives and darts, these weapons are wielded with one hand. They are also quite powerful ranging weapons.

Chinchompas are stackable range weapons that can be obtained through the Hunter skill. The unique property about chinchompas is that they explode and damage everything in a 3 by 3 square centered around the target in multi-way combat zones. This can be very useful for training, and a guide about it can be found in the Ranging Help guide. Chinchompas are stackable, but cannot be 'Dropped' on the floor, since they are animals they are 'released'. They are tradeable but come at high prices.

There is one final thing to note about chinchompas: The attack style. Instead of having an accurate, a rapid and a long range setting, chinchompas have 3 different fuse lengths. Choosing a length appropriate to your distance from the target increases the damage, and the longest fuse results in Defence experience as well as ranged experience.

Salamanders and Swamp Lizards can be caught while Net Trapping in RuneScape, and and are powerful ranging weapons when fueled with Swamp Tar and a specific herb. To create the fuel needed to power these creatures, simply obtain 15 Swamp Tar, as well as the herb specified below. Use a Pestle and Mortar with the herb to mix it with the tar, which will in turn make Herb Tar. Then wield both the tar and the creature, and select your attack style to gain experience in a certain combat skill:

This extremely powerful Ranging Cannon can be bought for a nominal fee of 750,000gp, after you complete the Dwarf Cannon Quest. The cannon can hold up to 30 Cannonballs, Smithed from a Steel Bar (1 Bar makes 4 Cannonballs), and it is made up of a base, stand, furnace, and barrel. To use it, you must set up all four pieces on the floor, and load it with Cannonballs. After that, it will continue to rotate, hitting any nearby enemies.

Although the Dwarven Multicannon is a very cool weapon, there are a few things to note. First, you can't use it against extremely tough enemies such as the Kalphite Queen, King Black Dragon, Abyssal Demon or any of the Metal Dragons, as they will destroy it. Second, using it for extended periods of time will cause your cannon to degrade (you'll see a message alerting you of this). If this happens, simply pick it up and set it back down again.

However, if the cannon degrades completely, it will disappear and leave only Cannonballs behind. When that happens, you must head back to Nulodion and get a replacement cannon.

There are 2 main kinds of Ranging armor in RuneScape, which increase both your Defence and Ranged Attack. These armors are Crafted from either regular Leather or Dragon Leather, which gives protection against Magical attacks as well.

This is the most basic type of Ranging Armor, but it offers some protection against attacks. Some pieces of leather armor can be Studded with Steel Studs.

This armor is slightly stronger than regular leather or studded armor, and it requires at least level 30 Ranging and Defence to wear. Check out the Tai Bwo Wannai Cleanup Activity guide for info about making it.

Dragon Leather can only be made from Dragonhide, which is dropped by the different kinds of Dragons roaming around RuneScape. There is Green, Blue, Red and Black Dragon Leather, each of which requires at least 40 Defence and a specific Ranging level.

Spined Armor can only be acquired from materials gathered by killing Dagannoths on Waterbirth Island, and it cannot be bought in any shop. There are different types of Spined Armor: Ranged, Magic and Melee. We're after the Ranged Armor in this case.

Dagannoths will drop hides, which you can take back to Sigli the Hunter in Rellekka to have made into armor. You will need 6 Dagannoth hides, 1 Circular Hide, 1 Flattened Hide, 1 Stretched Hide, and 22,500gp to make a full set. to complete the set, you need to get the gloves and boots by killing Dagannoths.

The helm, body and chaps all require 40 Ranged and Defence, while the boots and gloves have no requirements.

Aside from Leather and Dragonhide Ranging armor, there are also special kinds of equipment that you can get.

Robin Hood Hat & Ranger Boots are only obtained through Treasure Trails, although they can also be traded.
Karil the Tainted's set, including the armor and crossbow are obtained from the Barrows. It requires 70 Ranging and Defence to use.