Runecrafting is both a fun and useful skill, giving you the ability to make your own Runes from scratch. This skill can probably be considered a Mage's best friend, as spells can often use up many Runes, and with this ability you'll be able to craft your own! Before you can begin Runecrafting, you need to complete the Rune Mysteries Quest.

Runecrafting is an interesting and fun skill to practice in RuneScape, as there are many different kinds of Runes to make, and several parts to making them using this skill. Often times, you will not be standing in the same spot for a long time, so the skill moves along quickly and you can get a great deal of Runes crafted in a short time.

Before you can start crafting your own Runes, you need to mine some Rune Essence from the Essence Mine. Of course, not just anyone can find this mine, and only several characters in RuneScape can teleport you to it:

Once you're in the mine, just mine some Essence from any Rune Essence rock. You will either get Pure Essence or Normal Essence. These different Essence will be explained later on. After using the nearby portal you will be teleported to the character you spoke before.

You will also need a Talisman, depending on the type of Rune you wish to make. You need to use the correct Talisman with the ruins around RuneScape to be teleported to an Altar to craft your Runes. Check the Talisman and Altar charts below for more info. 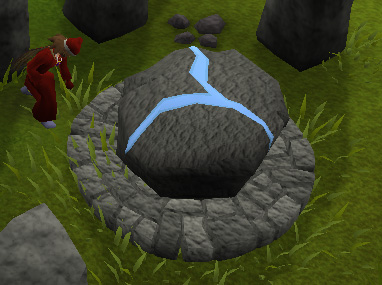 After completing the Zamorak Mage's Runecrafting task, Members will have the ability to obtain Pouches for carrying Rune Essence. If you carry a pouch while mining essence, you will have a number of additional slots to carry Rune Essence in. There are 4 different sized pouches, each able to hold a certain amount of Rune Essence, but you can only carry 1 of each pouch at a time, and a pouch can only carry one type of Essence at a time.

The different sized pouches are sometimes found from the loot of the Abyssal Creatures in the Abyss, including Abyssal Leeches (level 41), Guardians (level 59) and Walkers (level 81).

Over time, your pouches will degrade, which means that they will be able to carry fewer pieces of Rune Essence until you have them repaired. When a pouch degrades, a message will appear in your chat box, and the pouch will become darker in color. If you continue to allow your pouches to degrade, eventually they will fall apart entirely and will be completely unusable. At this point, they cannot be repaired.

There are two types of Rune Essence found in RuneScape: Regular Essence, and Pure Essence.

Regular Essence can be used to Runecraft all of the FreePlay Runes, including Air, Water, Earth, Fire, Mind and Body. Member Runes such as Nature or Law Runes can't be crafted using this kind of essence.

You will always mine Regular Essence if you are a FreePlayer, or if you're a member with less than level 30 Mining.

Pure Essence is used to craft all types of Runes, and can only be mined by Members who have level 30 Mining or better.

Runecrafting gloves are very useful when runecrafting, as they double the experience of the rune corresponding to your gloves. The gloves crumble after you craft 1,000 runes of the type corresponding to your gloves. To obtain them, you must buy them from Reggie at Fist of Guthix for 75 Fist of Guthix tokens. To get another pair, simply buy it from Reggie.

Once you have some Rune Essence, you're going to need a Talisman so that you can enter the Altar of the Rune you wish to make. Many of them are dropped by enemies around RuneScape, and after you have the one you need, bring it to the ruins of that specific Rune (If you have an Air Talisman, bring it to the ruins of the Air Altar) and use it with the "Mysterious Ruins" to be teleported to the actual Altar.

A Runecrafting Tiara is mostly the same as a Talisman, except for the fact that you can wear it on your head rather than carry it in your backpack. This way, you can save 1 extra space per trip for Rune Essence, which is very helpful for high level Runes. Check out the Crafting guide for info about making Tiaras.

Once you've crafted a regular Tiara, it's time to enchant it. Bring the Tiara to the Runecrafting Altar of your choice, along with the same kind of Talisman. Use the Tiara on the Altar to bind the Talisman and Tiara together to make an enchanted Tiara. This will cause you to lose your Talisman, but it's very useful in making higher level Runes since you don't need to use it with the altar to access it (thus saving a space in your inventory).

Now that you have both your Rune Essence and a Talisman for the kind of Rune you want to make, you need to find the Altar to which the Talisman belongs to. You can choose the "Locate Altar" option for the Talisman itself and be pointed in the correct direction, or follow the directions and look at the maps in the below chart.

Anyhow, just use your Talisman with the "Mysterious Ruins" to be brought to the Altar. To make the Runes, just select the "Rune-Craft Altar" option from the Altar itself to craft all of the Essence in your backpack into Runes.

Tip: You can mouse-over any of the "mini-maps" below to see an enlarged picture of the altar's location!

The Ourania Altar, also referred to as the "ZMI Altar," is a Runecrafting altar with the ability to create a random mixture of runes from Pure Essence. The altar requires no specific Runecrafting level to use, but players with a higher Runecrafting level will have a greater chance of creating higher-level runes. No talisman, tiara or staff is required to enter or use the altar, and players will receive double the normal experience for each rune created on the Ourania Altar.

To reach the Ourania Altar, first enter the Ourania Cave. From there, players have two options to travel to the altar: a short but dangerous route, or a longer but safe route. The dangerous route is crawling with monsters ranging from levels 37 to 85, but it's notably faster than the safe route.

The nearest bank is run by Eniola, inside the Ourania Cave near the entrance. He charges 20 runes of the same type to use his service, so the most cost-effective method would be to carry around a stack of the cheapest runes you have, and simply pay with those.

The Abyss is a special area granting access to all of the Runecrafting altars in RuneScape, except for the Astral and Ourania altars. To use the Abyss, players must first complete the Zamorak Mage miniquest. Afterwards, the Zamorak Mage will teleport you from his location north of Edgeville in level 5-6 Wilderness, to the Abyss.

Once inside, players will find themselves in the "outer ring" of the Abyss, where there are numerous Abyssal monsters wandering around. From here, players must pass through an obstacle using one of various possible methods (eg. burning boils, chopping tendrils, or squeezing through a gap) to reach the "inner ring." The inner ring contains entrances to each of the Runecrafting altars found in RuneScape.

Once inside the Mysterious Ruins with the required items for making the runes you have selected (such as Rune Essence and a talisman, tiara or staff), simply click on the Runecrafting altar to craft the essence into runes. The Rune Essence in your inventory will be converted into the appropriate type of rune. You cannot convert essence in the form of Bank Notes, or inside a pouch or familiar, into runes; the essence must be in your inventory.

When you first start Runecrafting, you will only be able to make one of each rune per Essence. As your skill in Runecrafting increases, it will become possible to craft multiple runes from a single essence. In the below table, you will see the required Runecrafting level to guarantee that you will make additional runes (2x, 3x, etc.) from a single piece of essence. You will always receive the same amount of experience from crafting each kind of rune, regardless of the number you make.

Even if you're below these levels, it will still be possible to craft more runes, and the frequency of crafting more than one rune from a single essence will increase as your Runecrafting skill increases. Once you reach the level displayed in the table below, you will always make that number of runes from one essence.

Some runes, including Law, Death and Blood, have a "guaranteed" level to multi-craft which would be higher than level 99, and thus is impossible to attain (unless using potions to boost your level). It is still possible to double-craft these runes, but it happens less often as the initial level to craft each rune increases. Blood runes will rarely be double-crafted.

Combination Runes are a newer addition to Runecrafting for Members, and they are very useful to Wilderness Player-Killing. The basic idea is that you can combine 2 Elemental Runes together to make a single Rune. This newly-formed Rune counts as 2 different elements, such as both Water and Air. Only Elemental Runes such as Air, Water, Earth and Fire can be combined. You can create the following Runes:

In order to combine Runes, you'll need a few things including 1 of each Talisman, 1 type of Rune, and Rune Essence. So, if you wanted to make Mist Runes, bring an Air and a Water Talisman, either Air or Water Runes (whichever you wish to use), and Rune Essence. Depending on which Runes you choose to bring along, go to the other Temple (if you're making Mist Runes and bringing Air Runes, go to the Water Temple).

Enter the temple using the correct Talisman as usual, and then use the other Talisman on the Altar to combine the Runes.

Warning: The Talisman that is the same as the Runes you carry will be used up when combining them! Plan on losing 1 Talisman each time you combine Runes, so it would be wise to bring Runes who's Talismans you have more of.

The Necklace of Binding will give you a 100% success rate while combining Runes while worn. It can be obtained by enchanting an Emerald Necklace using the Enchant Level 2 Jewelry spell.