The ability to forge your own weapons and armor out of various metals found in RuneScape can be quite a useful skill. It can also be profitable, since as you gain experience and are able to smith better armors and weapons, the more money you will make from selling them.

There are two main parts to smithing in RuneScape: making the metal bars, and smithing them into useful items. Before you can start smithing your weapons and armor, you should first either mine the ores you need, or buy them from other players. Buying the ores or bars from other players may be faster than mining them, but it can be quite expensive.

In order to make a metal bar, you need to have the correct amount of ores, and many of the metals require another type of ore to make a bar. For a complete list, you can refer to the Smelting chart. Each item you make will need a different number of bars to smith it, and that info can be found in the Smithing Chart for the specific metal.

These helpful drinks can be bought in the Rising Sun bar in Falador for 3gp per drink. They will raise your Smithing and Mining levels by 1 point for a limited amount of time, allowing you to smith objects a level higher than your actual level.

As a reward from the Forgettable Tale of a Drunken Dwarf Quest you will get 2 Mature Dwarven Stouts which will increase your Mining and Smithing levels by 2, not just the ordinary 1 level. When Brewing Beer there is a chance that it will become Mature and give extra bonuses. To make it more likely that it becomes Mature you can add "The Stuff" which is something you can buy as a reward from Trouble Brewing.

Now that you've got all of your ores together, you should smelt them into bars so that you can make weapons and armor out of them. Just bring the ores to a Furnace (

), and choose the 'Smelt' option of the right-click menu. You'll be able to choose which kind of bar to make, as well as the number of bars to smelt. By default you will create the maximum number of metal bars using the available ores in your inventory.

Your character will then begin smelting the ores and creating the appropriate number of metal bars. 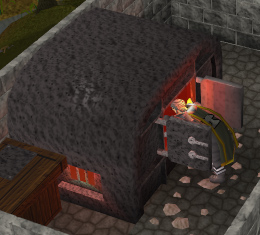 Another way to smelt all of your metal bars is to cast the Superheat Item spell on the ores. This of course requires 4 Fire Runes and 1 Nature Rune, but it can be much faster than walking to a furnace to smelt your bars of metal. If you smelt Iron ore with Magic, all ores will be smelted.

You'll find a number of furnaces (

) throughout RuneScape. Here are some of the most popular ones:

Using the World Map, you can find other locations for furnaces.

With your metal bars in hand, it's time to make some armor, right? Not quite. You first need a Hammer to work the metal with, and you can buy one from any local General Store. Now you can begin smithing items by finding an Anvil and using a metal bar with it. This will bring up a graphical menu with all of the different weapons, armor, and other items you can make.

When the menu comes up, pay attention to the colors of the names and number of bars:

Now you can choose the item you wish to smith, and if you have enough bars and a high enough level, you will smith it.

You can right click on an object in the smithing menu and select to make multiple items at once. This is much faster than just making one item at a time.

There are many anvils (

) that you can smith from throughout RuneScape. The most desirable location for free-players are the ones in Varrock, located south of the western bank. For members, the same location mentioned before still applies. However, some other locations include Yanille and Seer's Village. Using the World Map, you can find other locations for anvils.

Some items can only be smithed after completing a quest, and others may need to be smithed in a specific way. Here is some useful info to help you out.

Currently Bronze Wire is used only in the Creature of Fenkenstrain and Shilo Village Quests.

These are smithed 15 at a time, and are used in certain quests including Dragon Slayer, Horror From the Deep, In Search of the Myreque and Zogre Flesh Eaters. They are also used in the Construction skill for building furniture.

Smithed 10 at a time, although you must first complete the Tourist Trap Quest before having the ability to make them. You can add feathers to make them into a throwing weapon.

These can be smithed after completing the Death Plateau Quest.

After smelting a bar of Steel, use the Bar with a Furnace while carrying a Cannonball Mould with you. They are made in sets of 4, using a single Steel bar each time. You can only make these after completing the Dwarf Cannon Quest.

Pickaxes may be smithed after completing the Perils of Ice Mountain Quest.

Hastas are essentially one-handed spears and made in the same fashion as spears. However, you can only make hastas on a special anvil and must have completed the Smithing portion of Barbarian Training.

There are some hammers in RuneScape that serve a special purpose and have certain requirements to obtain them. There are currently two special hammers in the game: The Sacred-clay/Volatile-clay Hammer and Blast Fusion Hammer.