Most freeplayers hate one thing: reduced bank space! Here are some helpful tips that will help you organize your bank to contain the useful items, and to let you know which items you don't need to keep.

There are several helpful tips that you can use to clean out your bank, without risking any items that you may need later on. 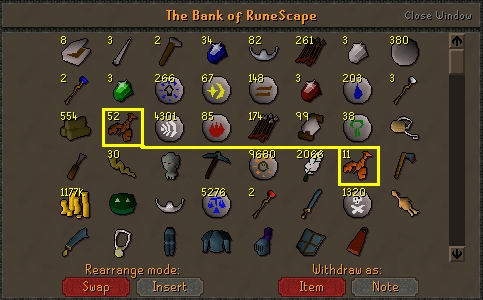 In this picture, there are both cooked and uncooked Lobsters. Since there are only 52 uncooked ones, it won't take long to cook them, and with the use of the "cook-all " option it's even faster.

Some items are better off to be worn, rather than sitting in your bank. 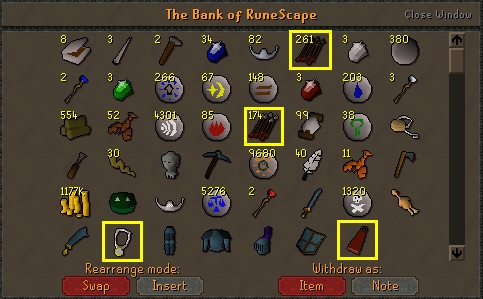 As you can see, capes, gloves, amulets, arrows and boots (not in this picture) can be equipped at all times. These items:

A lot of items can be discarded when you're not using them, especially if you can just get them back for free or for small amounts of cash. 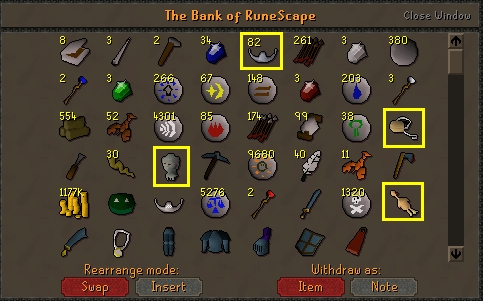 Here are several items that can be easily obtained for free or small amounts of money. The Rubber Chicken and Yo-Yo may be thrown away since they could easily be gotten back from Diango in Draynor Village. They're only fun items that you can show off, and this also includes Bunny Ears and Scythes.

You can craft your own Tiaras used in Runecrafting, but you'll also need a Talisman to make them. You may even be able to buy some from other players.

There is also no point in owning both Talismans and Tiaras; just convert your most used Talismans into Tiaras, and throw out the Talismans that you never use.

Items that are used in skills (fishing equipment, farming items, moulds and crafting equipment, and items bought from the general store like buckets or tinderboxes) should just be tossed out, unless you use them very often. When you're finished, just throw them away.

This includes items like broken arrows, broken armor, burnt food and other useless items. Just throw them away, because they can't be used. The exception is the Rusty Sword, which can be given to the Tindel Merchant in Port Khazard to identify. He'll buy them for a decent amount of money.

Don't keep multiple items for the same thing. If you have an Iron Hatchet and a Mithril Hatchet, either drop or sell the Iron one in a General Store. It's pointless to have multiple items of the same type.

Also, it's best to keep only one or two amulets of different kinds, such as Diamond Amulets. Try not to keep both enchanted and unenchanted amulets of the same kind either.

These items shouldn't be thrown away just to save space. 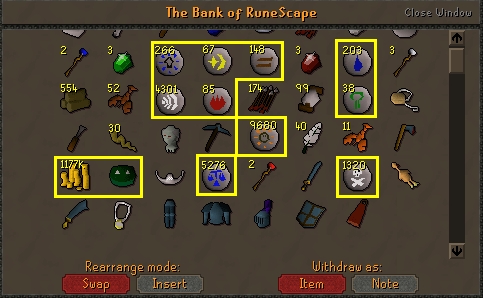 Here are some items that should never be thrown away. This includes the cash, mining and woodcutting equipment (below mithril can be thrown out) and Runes.

Usually it's safe to throw out Runes if they're in a small number, unless you're going to use them. Only keep Runes that you need; throw the rest out. Runes such as Law, Chaos, Death, and Nature should be sold rather than thrown away.

Train Your Skills With These!

If you have some items that you could train with, use them up rather than throwing them away. 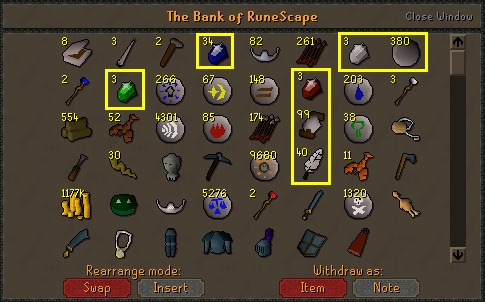 Many items can also be better used for skill training, so rather than letting them sit in your bank, use them up!

Always cut your gems up, since they're difficult to sell anyways, and can be used in Jewelry.

Use these in fishing, rather than letting them hang around in your bank.

Try to make these into useful Runes or merchant them.

You can use these in firemaking or fletching, or you could sell them. Usually, the lower-level logs can be burned or fletched, while it's better to merchant the higher ones like Yew or Magic.

Most rewards for Freeplayers aren't very good, but if you have any doubts, it may be a good idea to visit the Wise Old Man in Draynor Village. 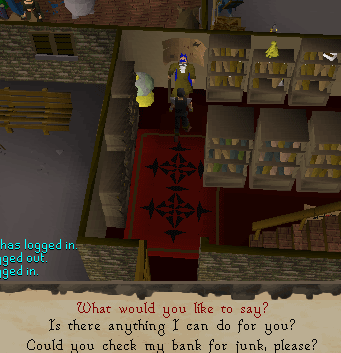 He will identify your quest items and he will help determine what you should and shouldn't keep.

The only good use for this weapon is to kill demons, as it is equivalent to Rune when fighting them. If you have a Rune weapon, just drop Silverlight. You can always buy a replacement from Sir Prysin in Varrock Castle for 500gp.

This has no use, and unless you don't have a better item, just toss it.

Once you've finished the Restless Ghost Quest, this can be safely thrown out. You can get another one from Father Urhney in Lumbridge Swamp.

Only keep this until you get a better enchanted amulet.