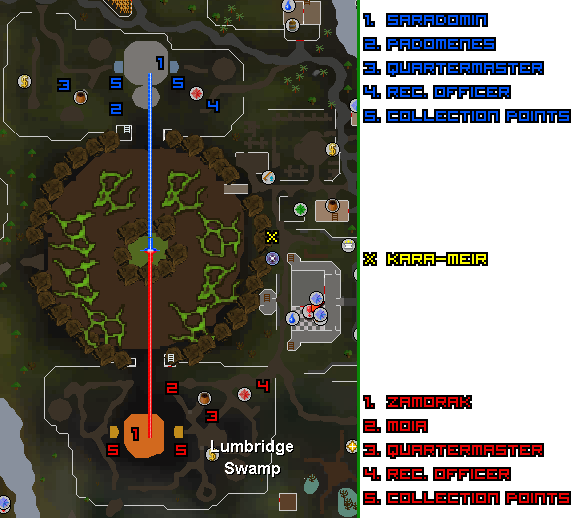 The Battle of Lumbridge is the first Runescape "world event" released with Runescape 3 on July 22, 2013. Players were automatically teleported to the battle upon login to Runescape 3. It is the first weekly event in a series of battles that will span 10 weeks with a new challenge every week.

The battle explained the presence of a mysterious portal that had been increasing in size behind Lumbridge Castle. A cutscene that all players were required to watch showed that Zamorak used the portal to Gielinor. Saradomin appears shortly afterwards and the two begin to fight. While Saradomin and Zamorak are currently at a stalemate, their followers have taken the fight to the battlefield and can be seen running from their respective camps or teleported by their gods to random areas.

Kara-Meir can be found near the Lumbridge lodestone. Players do not need to talk to her to continue although talking to her will provide some background information as to what is going on.

Note: If you missed the cutscene at the beginning or want to watch it again, you can see it again by speaking to Kara-Meir. 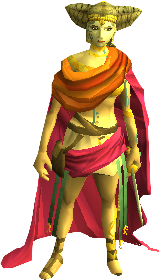 Players can choose a god to side with by heading over to either the Zamorakian or Saradomin encampment. Once players choose a side, they will be given a token of their god. Players can upgrade this token by collecting more Tears. The first upgrade to a Silver token requires 1000 tears. A Gold Token requires 2000 tears. A Runite Token requires 3000 tears. Players can switch sides, but they will lose their renown in doing so. The symbol of their chosen side will also be displayed above their character. Once a side is chosen, walking into the opposing side's camp will result in heavy damage!

Note: You can disable the allegiance by clicking the quest icon and the "Battle of Lumbridge" tab and unchecking the Display Allegiance tick. 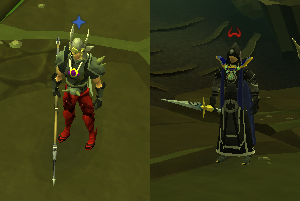 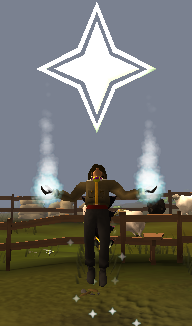 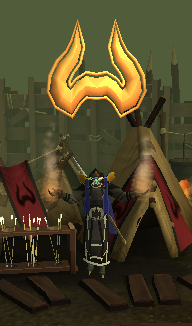 for their side which must then be deposited at each side's respective camps. These tears will help determine which god is victorious. 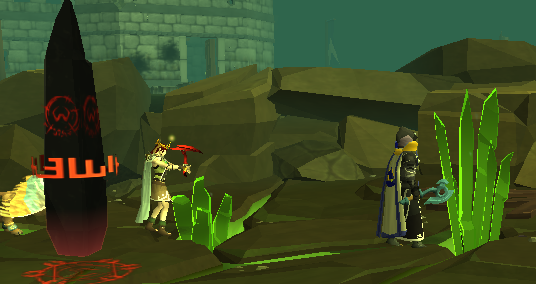 Depositing Tears rewards the player with Renown as well as votes. Votes can be used to determine the future battle plans. Renown can be used to purchase rewards from the quartermaster.

Players can vote for an offensive or defensive strategy every week. 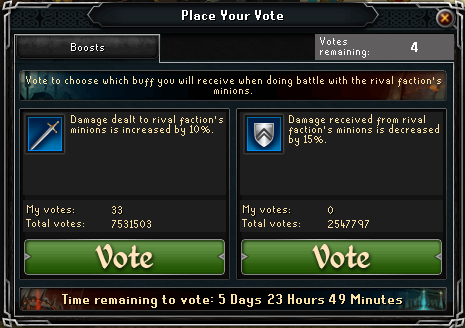 While collecting tears on the battlefield, random events may occur that can either affect you or an entire faction at once.

Rockfall: Shadows appear at several battlefield locations and, after a few seconds, rocks fall and deal damage to players standing under said locations. The rocks can be mined for Divine Shards

, worth 30 Divine Tears each. You can only have one Divine Shard at a time. To mine more from the rocks, you have to deposit the shards. Game Message: Rocks are falling from the sky. Avoid them! 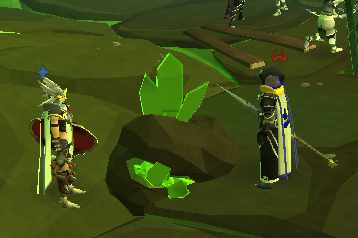 Unstable Nodes: The colour of several resource nodes will change to orange or yellow for a small amount of time. Gathering resources from unstable nodes deals damage and grants no Divine Tears. Game Message: Several resource gathering points have become unstable. Be careful! 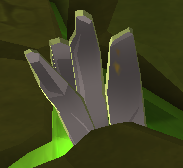 Sharpshooter Incursion: A squad of Sharpshooters join the battle. Killing them rewards the player with an extra 50% of Divine Tears. Game Messages:

Healer Incursion: A squad of Field Medics enter the battlefield and begin healing friendly troops. Killing them rewards the player with an extra 50% of Divine Tears. Game Messages:

Minelayer Incursion: A squad of Minelayers enter the fray and begin placing mines that deal heavy damage to opposing faction NPC soldiers and players. Killing Minelayers allows the player to loot and use their Sacred Mines

Gatherer Incursion: Gatherers enter the battlefield and begin gathering resources for their faction. They can bank their Divine Tears and increase their faction score by a small amount. Killing them rewards the player with a large amount of Divine Tears. Game Messages:

Players can speak to each side's quartermaster to see possible rewards. New tiers of rewards will be unlocked as the battle continues. 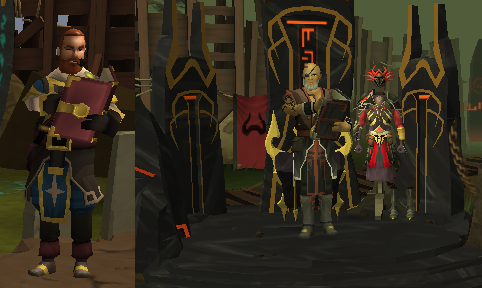 Armor scales up to 75 defense. New tiers will be unlocked as the battle continues.

It isn't easy to perform damage control when you have two of the most powerful beings in Runescape duking it out on your doorstep. While Saradomin and Zamorak may not care where their battle is taking place, or what human hovels they destroy, the reality of the destruction they leave in their wake is a serious problem for the town of Lumbridge. The castle walls have very nearly been reduced to rubble, houses have been leveled, and the earth itself has been blasted into a sizable crater.

Because of this, the Duke needs help defending and rebuilding Lumbridge and has been forced to dip into the town's emergency treasury. In order to ensure the most critical aspects of Lumbridge are preserved, the Duke is asking players interested in helping to vote for one of four choices each week, and whichever choice gets the most votes will be implemented, changing the face of Lumbridge forever.

Players will be compensated with bonus experience in the skill of their choice for participating, but the allure of having a say in the fate of one of Runescape's most famous towns should prove to be the strong enough. The battle of Zamorak and Saradomin clearly has implications beyond who will simply emerge victorious. 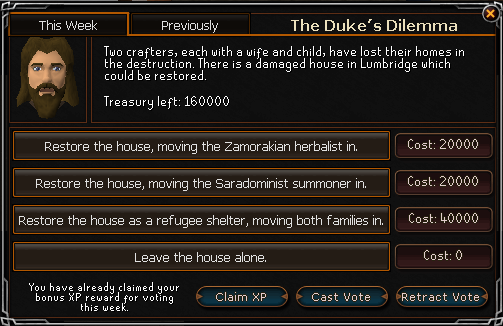 Week Two
We could expand our private army to help in the defence of Lumbridge, in case the fighting spills from the crater.
Option 1 - Recruit more guardmen. Cost: 30,000
Option 2 - Form a people's militia. Cost: 15,000
Option 3 - Legitimise the Thieves' Guild in exchange for aid in battle. Cost: 15,000
Option 4 - Do not take any action. Cost: 0
Winning Option: 1