By: WarriorP
Special Thanks to: Da Scotsman, Linkred2, Patou, Steve

For the Christmas 2005 Activity, players have to help out around the pixie workshop to get several rewards.

First head to Diango in Draynor Village. He is the toy salesman. Here is a map of Diango's location and the workshop. 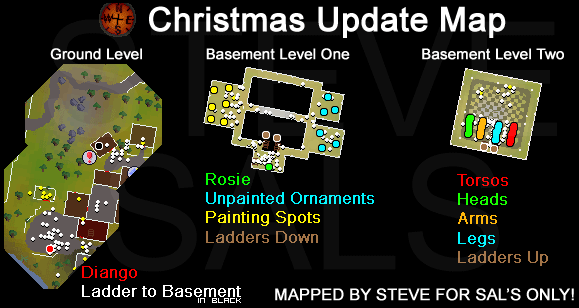 And here's a picture of Diango himself: 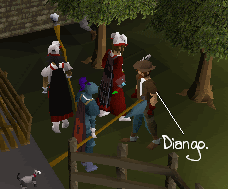 He tells you that his toy-making Pixies have done something wrong and aren't making toys as fast as they are supposed to. Once you have finished listening to Diango he will tell you where to go. The workshop ladders are shown on the map to the right. Here's the house where the ladder is found: 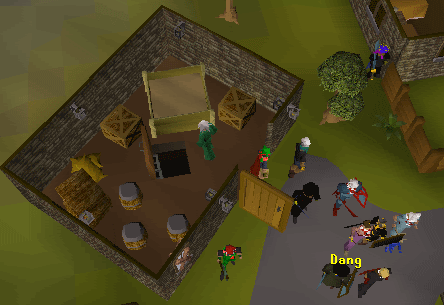 The house is next to the (!) on the map. Once inside it may be crowded because of the amount of people doing this kind of mini-quest. The Head Pixie Rosie will be the nearest NPC as you enter the workshop. 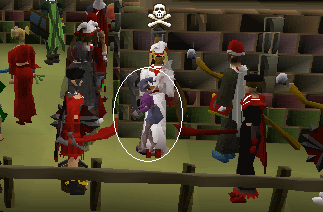 First thing to do is to talk to her, and you want to ask questions. There will be many options as show below:

Click 'I need a box for painted Baubles' And you will get an empty present box.

Now head to the far east of the room and you will se many crate. Make sure you have an empty inventory apart from your empty boxes. Now fill the inventory full of Baubles from the crates. 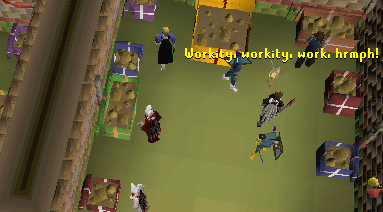 Once your inventory is full head to the far west. Now Its time to paint in the painting area! 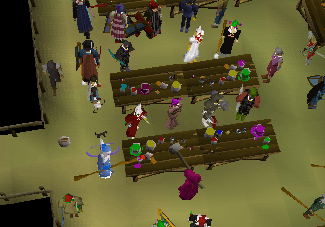 Now left click a workbench with paints on and paint. I found painting in order easier I used Pink--Blue--Green--Yellow--Red. 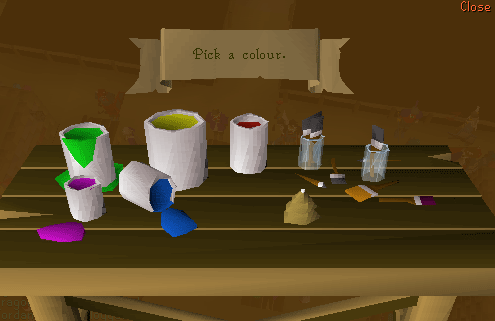 Once every bauble is painted left click on the painted baubles in order again (Pink to Red as show above) and use each on the empty box. Now that the box is full go back to Rosie the head pixie and ask a new box again. Once you have repeated the process and have 13 (Yes, 13) Filled Boxes, talk to Rosie again. She will take 8/13 Boxes of you. Now talk to diango and get 4 Scarves

Now, head to varrock center where the fountain usually is and you will see a giant tree. Use the remaining 5 Bauble filled boxes with the tree and a cut scene will occur. Watch it and when its finished left click at the bottom of the tree and you will receive a Puppet!

Here are pictures of each puppet:

And here is a picture of what you can do with them:

Now head back to Rosie in the workshop and instead of asking for a box of painted Baulines ask for a box for Marionettes (puppets) and go downstairs. 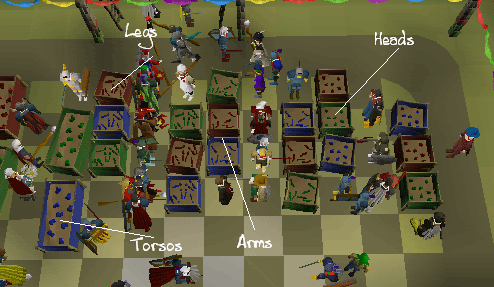 Ok, The reason I labeled each crate is because instead of painting, you make the puppets. But, You make them in this order: Torso--Head--Arms--Legs--String.

With the new box that was giving to you by Rosie, make 2 of each colored puppet (2 Green, 2 Red, 2 Blue) And put all 6 puppets in the box. Repeat this till you have 8 filled boxes. Now it's off to Falador.

Once in Falador had north to Doric's House which is in Doric's Quest and just 5 steps west there is a mysterious man. Which to some is Saradomin, Guthix and Santa. 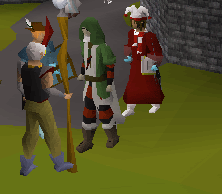 Talk to him with the 8 puppet filled boxes and he will tell you to speak to Diango. So head back to Draynor Village and speak to Diango to receive 4 Hats. 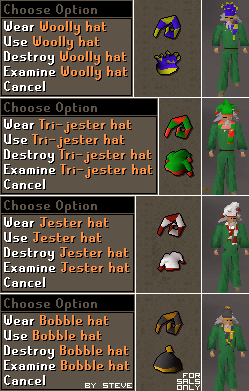 If you don't like the color of yours, you can get a new one from there. You can only have one marionette at a time, so just destroy your current one to get a new one. The three colors are red, blue, and green.