In November 2005, a route to Waterbirth Island opened up, and since then, the Dagannoth King have been a prime way to make (and lose) money in RuneScape. Currently they can hit for the second most amount of damage in the game (the TzTok-Jad can out-hit them). It is nearly impossible to kill them on your own, and doing so is not very efficient. The only way to kill them is by help of a friend(s). These creatures were also released to make us improve our teamwork skills indirectly. This also means that your friend(s) should be trustworthy. It is highly suggested that you do not slay Dagannoth Kings with people you do not trust.

Dagannoth Kings are located on the Waterbirth Island Dungeon. In order to reach the dungeon, you must get to Rellekka or you can use Lunar Magic to teleport there.

There are several ways to get to Rellekka:

Once you get to Rellekka, go to the most farthest dock. You will find two people. One of them being Jarvald.

Right click on him and select "Travel Jarvald". If you haven't done the Fremennik Trials quest, you will be charged 50gp. This is a small amount to pay but it takes up your inventory for the kings. As soon as you get to the island, follow the path east. You will soon find yourself in front of the dungeon. When you wish to enter it you will prompted by two choices:

Select "Go in, I don't mind dying!". Once your inside turn on Protection from Melee or Protection from Range prayer. If you have Rune throwing axe then everyone should head north as this is the easiest route of the three.

One person can stand on one pad and the other on the second pad. This is necessary to open the gate. After it is open, run half-way and then walk. You may turn on protection from melee if you want (not recommended). After you reach the gate, wield rune throwing axe and turn on special attack. Then aim at the center pad in order to destroy all the pads. This will enable you to get to the ladder. Climb down the ladder and navigate the dungeon using the map.

Note: If you aimed at the prop ahead of you, none of the props would be destroyed except for the one ahead of you.

If you did not have rune throwing axe, then two people head north while the other two head through the center gate. Both you and your friend(s) run through the monsters and the people who went through the middle (Wallasalki route) must turn on Protection From Magic as Wallasalkis can hit up to 260! Once you both reach the props, aim at the other person's prop using a range weapon or a magic attack. Destroy them and climb down using the ladder. Now navigate through the map below. 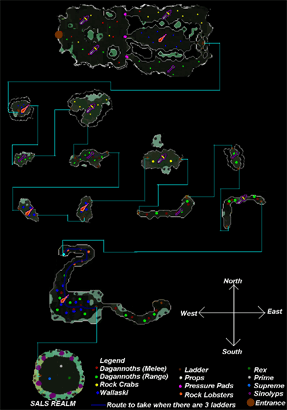 Warning: These creatures are poisonous!

Level: 303
Attack Style: Melee
Maximum Damage: 400
Most Effective Attack Style: Magic
Rare Drops: Dragon Axe, Warrior Ring, Berserker Ring
Slaying Method: As a mage, run south or north east and trap him along the coast. Once he is trapped mage him, turn on any prayer you like.

When you are ready enter the ladder for the kings. The mage always enters first as it is easier to lure rex and keep others safe, especially people who will be killing Dagannoth Supreme. Others enter after 2 or 3 seconds. 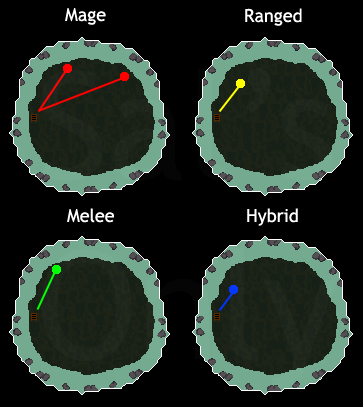 Image for mage (above left), shows the path you can take. Once you reach the other end, attack Rex. Rex will come for you and will get trapped along the coast line. You can now safely manage to kill Rex. Keep Protection From Magic on, until Prime keeps attacking you. If he stops, you can remove it or change it to Protection From Missiles. After you kill Rex, he will respawn in the center so be ready by walking 2 or 3 steps west. Repeat the process if needed.

If Rex is dead, and your team mates are killing Dagannoth Supreme, run up to the rex's respawn spot, and keep Protection From Range on. If rex respawns before supreme dies, he will hopefully come after you instead of going after your friend(s). If you are with an inexperienced group, this will lead to people running around entire place, and may eventually lead up to one of them being killed. If this happens, just remain at your spot and kill rex. Tell your friends to finish supreme off! This will be very handy as if Prime respawns, then all 3 of them can be on them.

If Rex does go after you do not immediately run to the safe spot. You must lure it there slowly and at the same time make sure your health is high. In order to achieve this, turn on Protection From Melee when rex respawns, and move 2 - 3 steps towards your safe spot, and let Rex catch up to you. Once he is done that, move 2 - 3 steps again towards the safe spot. Once you are sure that they are out of Rex's sight, run over to the safe spot and kill Rex. Repeat the process if needed.

As soon as you enter, run to your appropriate spot as shown in the image above (second from the left). Once there, drink a range potion if you have not drank it yet, and start ranging Prime. You may heal using Guthans on the Spinolyps if you wish. Make sure you have Protection From Magic on all the times. If you want you can attack Dagannoth Supreme and heal on him. If you do so, turn on Protection from Missiles.

Warning: Do not attack when Prime is alive! This will either get you killed or get you low on food. You do not want that.

It is possible to turn off Protection from Magic against Prime when ranging. You or your friend(s) can take turns on how to take hits from Prime. The person who will be taking hits from Prime must be at least 3 step away than the rest of the group. Also, no one else should be within a 5 step range from Prime. Everyone except the person taking hits from Prime can keep their Protection From Magic prayer off. If the person who is taking hits, turn it off he will be dealt damage above 400 (if lucky, it will be in the 200s). While you kill, your friend(s) can turn it off as Prime will not change target unless someone else comes near you.

Note: Keep your Protection from Magic prayer on!

This is the easiest way. Once you enter (drink your potions before entering), keep Protection From Magic on, and kill Dagannoth Supreme. If you wish you may turn on fighting prayers. This will be the hardest Supreme during that trip. This is because you will have to kill it while Prime is still alive. If you brought a weapon like Dragon mace, use it to special on Supreme. Once he is dead, you may use Guthans War spear on him or Abyssal Whip depending on your hp. You may have to eat a shark or drink a saradomin brew.

After Supreme has been killed, run over to the rangers, go all the way to the north east coastline. Now you must wait for the rangers to kill Prime before attacking Supreme. In the meantime, you can heal on Spinolyps if they come near the shore. Once Prime is dead, turn on Protection From Missiles and kill Supreme. Use guthans on him if you wish to. Repeat the process.

This is an efficient method, as less people are needed. It is highly recommended that you do not do this if you are a beginner.

Note: Rangers are not needed for this method.

Both mage and the warrior enter the dungeon at the same time. Once inside, the mage runs to the North East Rex safe spot. In the meantime, the warrior distracts Supreme and make sure that the mage gets there. Now the warriors runs back up, and goes east to the safe spot (avoids dagannoths and wallasalkis). Now the warrior must wait for the mage to lure prime. Once Prime has been lured, mage will tell the warrior that it is safe to come back down. The warrior heads down once he/she has received this message. Now all the warrior has to do is slay Supreme with Protection From Missiles prayer.

This is the hardest part in this method and only the mage can achieve this. Staying at the Rex's north east safe spot, the mage must wait for Prime to go north. More north it goes better it should be. Prime should at least pass you in going north. Once prime is all the way north, attack it (Protection From magic prayer on). Now run all the way south, and then go back to Rex's south safe spot. Prime should have moved to the Rex's north safe spot and should be visible in the mini-map. Once this has been achieved, you should signal the warrior that it is safe to enter. Drink Super restore when your prayer is low.

Sadly, this is the place where most lurers come to try to get some cash. Unlike wilderness, here they try to get all three Dagannoth kings on you. This will lead to death, 75% of the time. When lurers do come in, tell mage that lurers are here. This will warn the mage and the mage will turn on Protection from Magic if it was off (most of the lurers, go for the mage first). Now head straight out the dungeon and hop worlds. Do not run around in there. If you wish you do not move at all, and let the lurers die. You can just kill Supreme and waste a little food until lurers die or get bored and leave.

In conclusion, Dagannoth Kings are the most powerful creatures after TzTok Jad. Killing them can be fun, exciting and dangerous. If you do not trust your friend, do not go with them! Either share the drops, or rely on Lootshare. You are already making enough money and you should consider yourself lucky that you can make money this way compare to other who can't. So always share the drops and play fair. Do not steal drops, or their items if they die. It's just pixels! So good luck, and do not be a noob.