The King Black Dragon, also known as the KBD, is a three-headed, level 276, massive dragon and was once the most powerful creature in RuneScape. The rewards are high, but so are the risks. Are you up for the challenge?

It is suggested that you do not use magic attacks, because you can't wear armor that will protect you from the KBD's attacks while successfully casting magic spells.

Whether you are using melee or range, you absolutely need an anti-dragon shield, otherwise you'll get burned to a crisp. 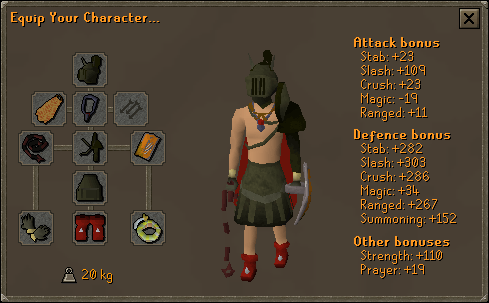 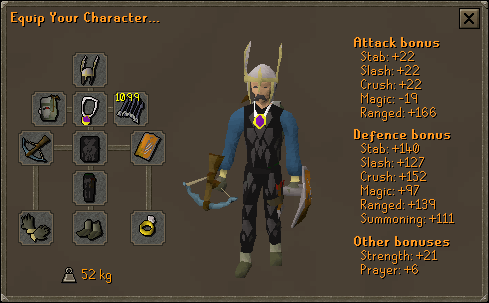 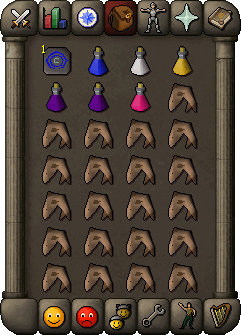 You can replace the super set with more food. You need the super antipoison pot because there are poison spiders right outside the entrance to the KBD and you can also be poisoned by one of the KBD's attacks. The super antipoison also makes you immune to poison for five minutes, rather than the regular antipoison which just cures your poison. You can also replace the sharks with monkfish, lobsters, or baskets of fruit. It is suggested that you don't take anything that heals lower than 12hp. 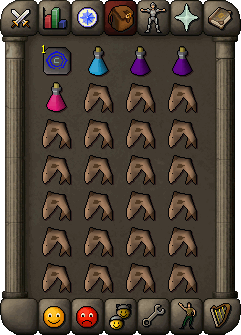 You can replace the ranging potion with more food. You need the super antipoison pot because there are poison spiders right outside the entrance to the KBD and you can also be poisoned by one of the KBD's attacks. The super antipoison also makes you immune to poison for five minutes, rather than the regular antipoison which just cures your poison. You can also replace the sharks with monkfish, lobsters, or baskets of fruit. It is suggested that you don't take anything that heals lower than 12hp.

There are a few ways to get to the KBD other than walking there (Which isn't a good idea, seeing as the KBD is in level 42 Wilderness). Using the Ardougne lever, obelisks, walking from Bounty Hunter, canoes and Lava Titan.

The Ardougne lever will teleport you to level 54 Wilderness. You will need a sharp object such as a sword to cut through a web once you are in the Wilderness. 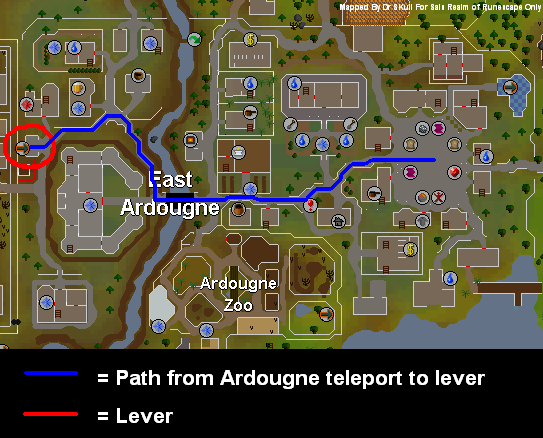 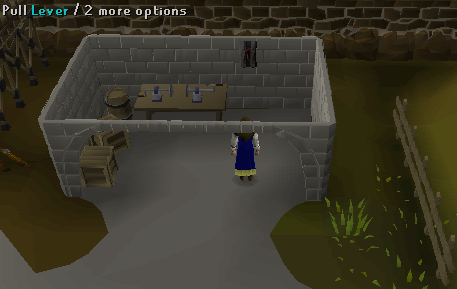 You now must walk to the KBD lair. On the way, you will encounter Hellhounds, wolves, Giant Spiders, Deadly Red Spiders, and possibly Revenants. 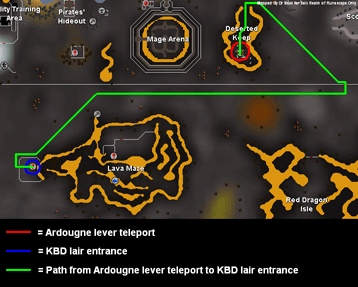 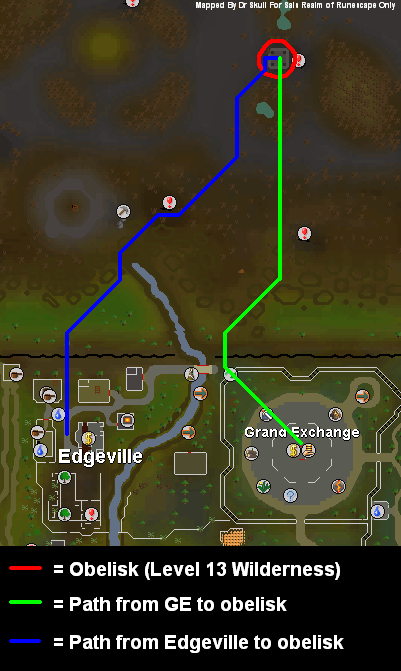 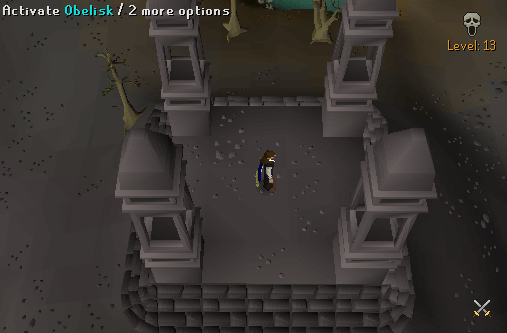 You are aiming for the obelisk in level 44 Wilderness. Then it is a short walk from there to the KBD lair. 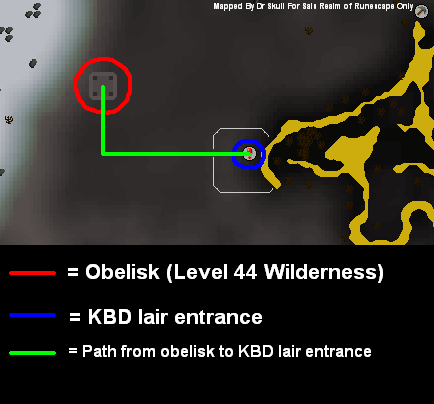 Teleport to bounty hunter using a games necklace, and then walk to the KBD lair. 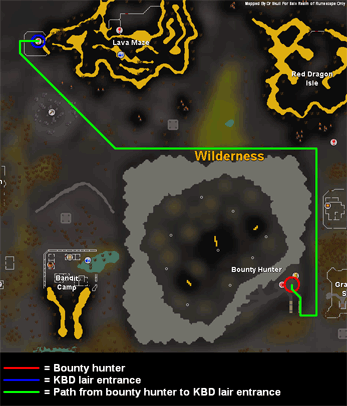 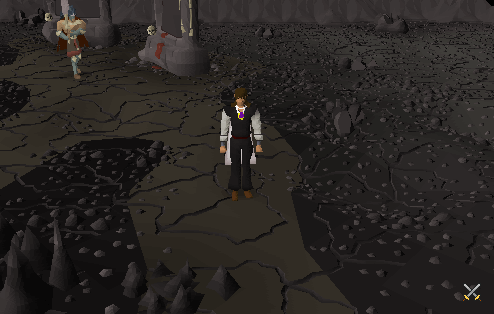 Go to any canoe station and choose the Waka canoe. Then choose the Wilderness as your destination. You will end up in level 35 Wilderness. You then must walk to the KBD lair. 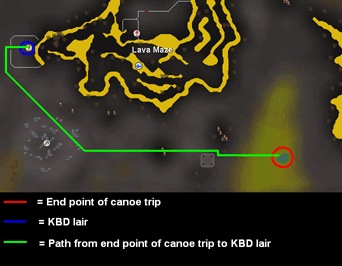 After you Summon your Lava Titan, use it to teleport. You'll end up right outside the KBD entrance. 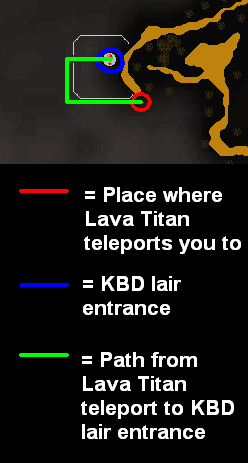 Entrance to the Lair

Once you get inside the fence, run past the lesser demons and climb down the ladder that's straight ahead of you. 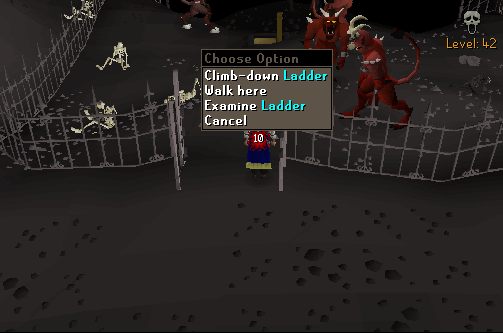 Then pull the lever. Remember to check your chatbox to see if you were poisoned by the poison spiders! 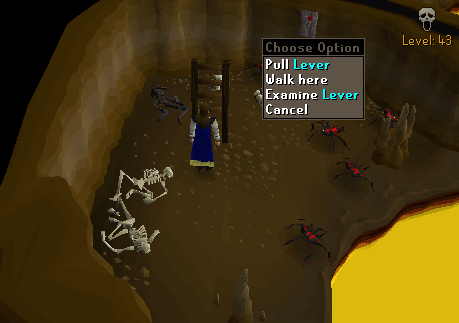 It is suggested that you take a Beast of Burden (BOB), in which you take extra food or potions. Unless you have a very good Summoning level (90+), don't take attacking familiars. If you have 88+ Summoning, take a unicorn stallion and a lot of Healing Aura scrolls. This will save you a lot of inventory space because you won't need food. If you have 68 Summoning, instead of a Beast of Burden, you can take a bunyip, although make sure you bring food too.

Going With a Group

If it's your first time going to the KBD, you should go with a few other people who know what they're doing, just so you get a feel for it. Even if you aren't going for the first time, if you're under level 95 combat (Without Summoning), you should still go with a group. Here's a list of how many people you should have in your group depending on your combat level. (Combat levels do not include Summoning)

If you want to share your drops evenly, then you should have lootshare/coinshare on, which requires being on a lootshare world. This will mean that it will be harder to find an empty KBD world, so you'll either have to keep hopping until you find an empty world, or you can just help whoever else is already there kill the KBD. 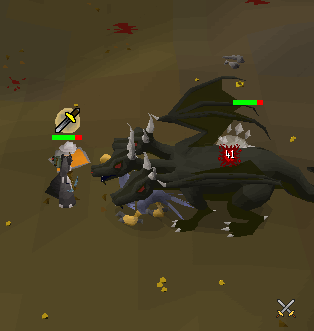 How to Kill the KBD

If you're in a group, make a circle around the dragon. That way it will spin around in circles trying to attack everyone, and only getting in a few attacks. This will minimize the amount of attacks from the KBD.

If you are soloing, stand in the KBD's melee area and pray melee. This protects you from his melee attack and also reduces the chance of him using his three breath attacks, saving a lot of food and potions. Since you will be using prayer the whole time, you can replace some of your food for prayer potions, seeing as you won't need much food.

Finally, the beast is dead, and you get the loot! There are many things the KBD can drop, such as: