Some of the various RuneScape weaponry have special attacks that Members can use against their opponents in battle. Depending on the weapon, it may boost your stats, pack an extra-hard punch, or hit your enemy multiple times.

Certain weapons will have the option to use its Special Attack from within the combat interface menu. To get to this menu, just click on the crossed swords icon, next to the stats bar icon. This is where you'll see your fighting style, along with the Special Attack bar at the bottom of the menu. 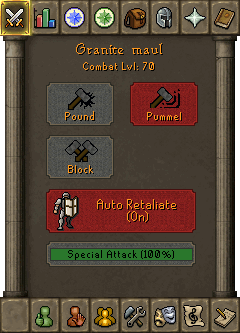 Energy will refill slowly, so it may take awhile before being able to use a special attack again. Some weapons will use up more energy than others, so you may be able to use an attack several times before you'll have to wait.

Two very fast blows are dealt using the dagger, and your damage and accuracy are moderately increased.

This is a very powerful attack using the Dragon Mace, however your speed and accuracy will be greatly reduced.

This special is another very powerful attack. Your Strength will be greatly increased, while all other combat stats including Defence, Attack, Magic and Ranged are decreased. 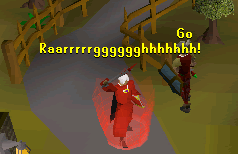 This attack forces your opponent back and stuns them, although no damage is done. 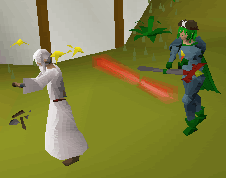 This is a more accurate attack, and it will stop your opponent from using any protection Prayers for 5 seconds if it's successful.

An incredibly powerful slashing attack. On large-sized monsters, you can hit twice for added damage.

This is just an extra-powerful and quick attack on your opponent.

This attack will lower your enemy's magic and Defence stats when you hit them.

This attacks creates an area of energy that causes up to 14 damage to any nearby enemies. 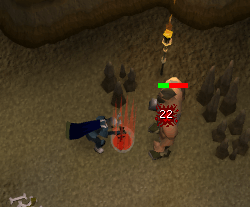 A very large accuracy increase bonus is given when you use this special. 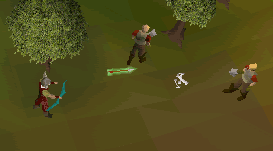 Two speedy shots will be fired at your opponent, but your accuracy will be decreased.

Fires a single shot with the normal power you would get from a Crystal Bow.

This will temporarily decrease your enemy's magic level by the amount of damage you cause to them.

In a multi-way combat zone, the axes will bounce from target to target, causing damage to each monster it hits.

Like the Bone Dagger's special, this attack will lower your opponent's Defence temporarily by the amount you inflict on him or her.

This attack will be more powerful than a regular one, but your speed will be slower as well.

This attack is more accurate, and if it's successful, 25% of your opponent's energy will be transferred to your character. However, this attack will not work on NPCs or monsters since these characters do not have run energy.

A faster attack, without any fancy special effects.

This attack bolsters your Defence stat for a short time. 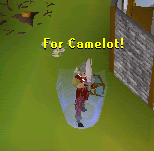 If you hit an enemy with this attack, their Attack, Defence and Strength will be lowered.

This special attack just works on Vampire Juvinates east of Burgh De Rott. It stuns them in the air in order for you to use a Balance Potion on them. Each Rod of Ivandis can do the special attack 10 times before the Rod crumbles to dust.

Lowers your opponent's Defence level by the amount of damage you inflict on him or her divided by ten. So, for example, if you hit a 100, your target's Defence is decreased by 10 (100/10).

This attack doubles your chance to hit. A successful hit will lower either your enemy's Defence, Attack, Ranged or Magic level by 10% of the damage caused.

This special attack ignores the Meleee Protect Prayer of your opponent. It also recharges your prayer by the amount of damage you cause divided by ten, so hitting a 150 with this attack would recharge your prayer by 15 (150/10). This effect can also "over-charge" your prayer. So if your initial prayer was 48/60 and you hit a 150 on your opponent, your prayer would be charged to 63/60.

This special attack is only usable Underwater. Monsters found underwater include Giant Crabs and Mudskippers, which are found in the Mogre Camp (the camp used in Recipe for Disaster). Zombie Pirates can also be found underwater and they are located on Harmony. This special attack doubles your chance of hitting, and a quarter of what you hit is added to Attack, Strength and Defence.

This special attack hits your opponent for an extra 10% damage. It will drain your opponent's combat stats in the following order: Defence, Strength, Prayer, Attack, Magic, Ranged for the amount of damage you inflict, divided by ten. So if you inflict 450 damage on an opponent with 20 Defence, Strength and Prayer, it will drain their Defence and Strength to 0, and their Prayer to 15 (20 - 5).

This special attack inflicts an additional 25% damage on your opponent.

This special attack will freeze an opponent for 20 seconds, making them unable to move (although they can still attack you).

This attack has a chance to inflict 50-150 extra damage to your foe with magical lightning bolts shooting down. In order for the attack to work first you must hit something with your normal attack, then use the special. If you hit your max hit while doing the special, the Saradomin Sword will hit 160 with the extra lightning plus what your max hit was. 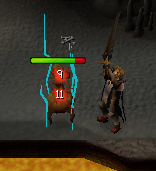