The Wilderness (also known as the "wildy" or "wild") is a very dangerous place. It is the only place in all of RuneScape that players are allowed to kill each other at random if the two levels are in range. This guide will help you to maximize your chance at staying alive and avoiding deathtraps.

Unless you have a pure mining account (very low combat level) it's inevitable that if there are PKers present, you'll be attacked upon logging in at the Rune rocks. This is where scouts come into the equation. Having an extra account (or 2) allows you to log in at a safe location to "scout" out the world for Pkers and un-mined Rune rocks. If the coast is clear and there are free rocks, proceed to log in with your mining account and get to work on the ores. However if it's not, continue world hopping. It is an effort to go through Tutorial Island, but it is strongly recommended you do so, unless you're feeling lucky.

The best place to have your scout account located is here: (Indicated by the pink oval) 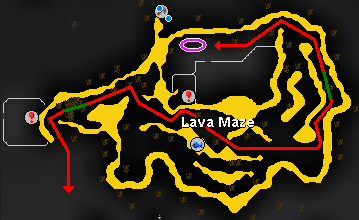 This is because it allows you to see if there are un-mined Rune rocks and if Pkers are present, without being in any danger of being attacked. It's a little tricky to get there though, especially with a level 3 character, so be sure to bring some food. Also, there are parts of the maze that require you to slash through a web, and therefore a weapon of some sort (Dagger, Sword, etc.) must be brought with your scout. These parts are indicated with a green line.

Attiring similar to this is recommended: 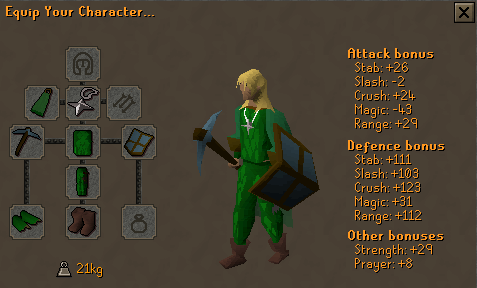 Because it is a F2P wilderness guide, all the items are for free players.

Note: If you're not willing to risk this much every time you go in search of Rune, you shouldn't even consider mining it. 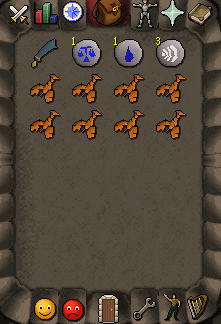 The best Route to take (Bank --> Ores), is from the Edgeville bank. This path is illustrated below:

The added red line that does a loop through the Monastery indicates the re-fill of prayer points. It is essential that you have FULL prayer points before every single trip. You can also use the monks there to heal yourself, meaning you don't need to waste extra lobsters getting your health back up to full. Hopefully this is the only path you'll ever have to take, but in the unfortunate circumstance of a PKer attack, continue reading.

Player Killers are the bane of the Rune miners' existence.

There are two general options you can take when you're trying to escape from a PKer. The first, is to take the most direct route straight down to level 20 Wilderness, where you can teleport to Falador. Also, it is possible to distract the PKer with the Chaos Dwarf NPC. This method is illustrated below: 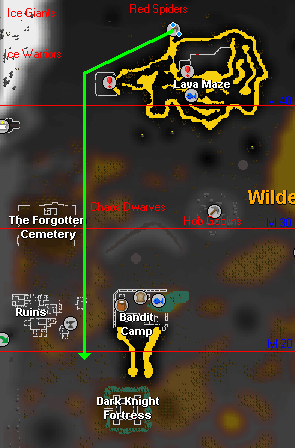 This is a good option when you have 100% energy, and you have a light inventory (Not many ores). If this is not the case, the methods below are the ones that should be taken.

The general aim of this method is to 'lose' the PKer, allowing you to log out safely. To be able to log out, your character must be out of combat for 10 seconds or more, hence it is essential that you lose them by hugging trees or rocks. Below are some alternate paths that can be taken upon being attacked by a group of PKers. Note that the yellow circles indicate prime spots to hug rocks or trees, and that to the left of the vertical dotted pink line is all Single-Combat Wilderness area. 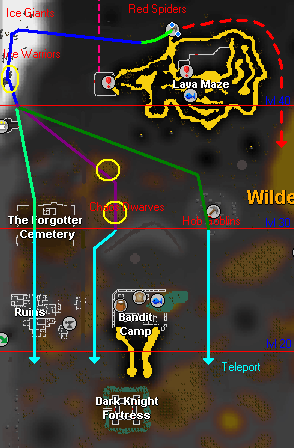 Note: If running along the cyan line at the end of this line, be sure not to stray too far East, as the area directly next to the Bandit Camp is Multi-Combat Wilderness.

Completing the Mage Arena enables you to use God spells such as Saradomin Strike, Claws of Guthix and Flames of Zamorak. As it's rewards are useful, it is also equally deadly. Most people would rather take the risk of using the Wilderness lever to teleport them from Ardougne. This way, although faster, can get you killed much easier.

If you decide to take the lever from Ardougne to the Wilderness, ensure that you're at full energy and have brought your items required for the Mage Arena. Use the lever as shown below: 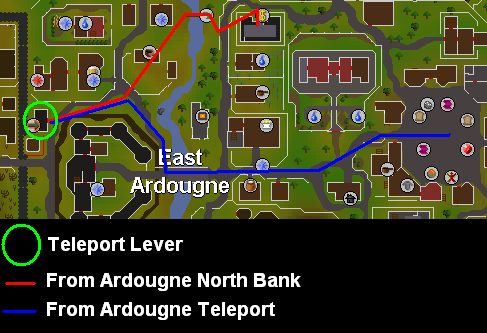 You will be teleported to the Deserted Keep in the Wilderness. Once there, you might want to get into the Mage Arena as quickly as possible unless there's a PKer team lying in ambush there. If you ever get caught by PKers, here's a route to get you to safety. 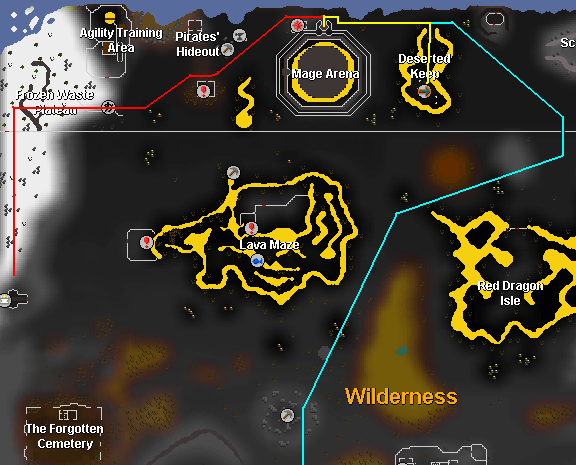 This route will bring you to non multicombat. If possible, bind the PKers that are following and log out, if not, continue running.

This route will use the least amount of energy and still may throw the PKer off by the gate but your chances of getting killed are high.

PKing in this category mostly range from level 2 up to the max teleportation point: 20. This is an easy way to get away; just teleport or run using trees at your advantage. But there's a caution, people tend relax in low level wilderness not realizing that there are spells that could kill them before they actually teleport or block their teleportation.

This Wilderness is favored by single PKers as it only partially in multi-area combat. 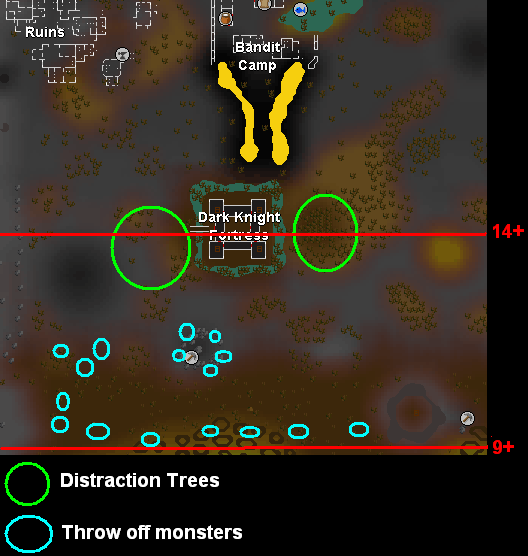 This is the most dangerous low-level Wilderness as it is in multi-combat area. Dangerous no doubt, but there are many escape routes that you can take without using teleport. 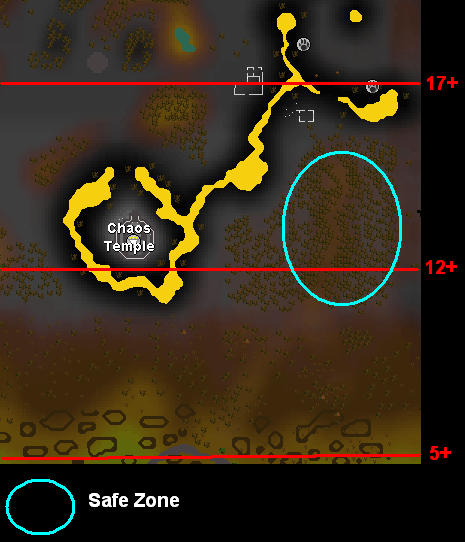 If you get attacked by the area surrounding the circle, run into the yellow circle and log out or if the attacker have chopped off his attack, walk back to Varrock wildy.

This category is the most dangerous, but if successful, the rewards are worth it. High level pking goes from level 20 wildy and above. PKers kill people at high levels near the Greater Demons, Rune rocks or Moss Giants.

The line nearest to the top indicates that there are trees in the area that you can get away from. Teleportation isn't really needed in this level of Wilderness. 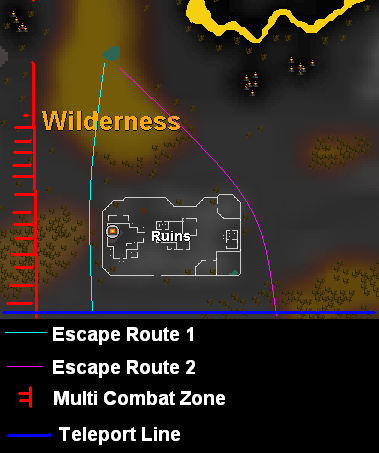 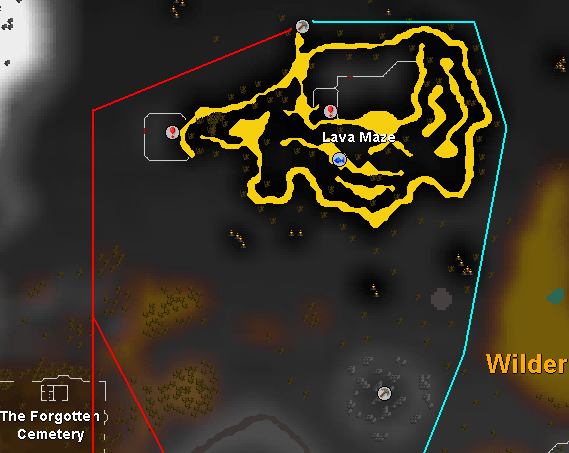 This is a very dangerous place to go to as it is in multicombat, 44+ Wilderness and the nearest non-multi area is about 10% of energy run. There isn't any way that you can run away from PKers at the Greater Demons but I recommend running to non multi area first so you can actually survive until level 20 Wilderness. Follow the yellow line along the way. 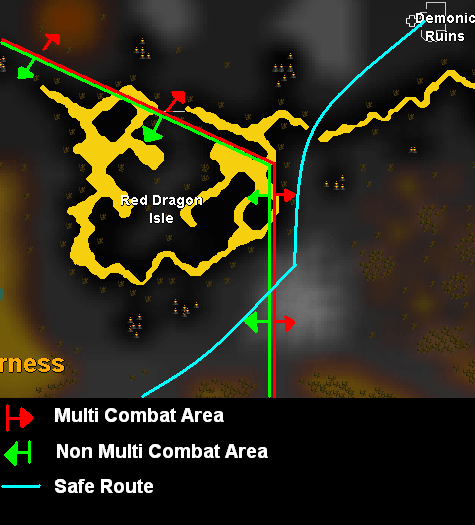